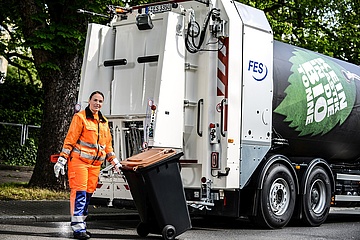 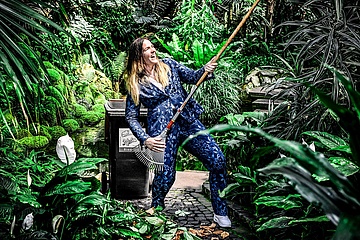 Stephanie Khiari rocked the Palm House with a blue lady costume with light blue floral patterns made of light Italian fabric at a photo shoot by photographer Daniel Baldus for the campaign “Clothes make people“. She used garden arithmetic as her guitar. A sweaty matter, because in the palm house an extreme humidity prevailed. She usually wears weatherproof and highly visible work clothing, as the professional driver of the Frankfurter Entsorgungs- und Service GmbH (FES) is the driver/loader of a large waste disposal vehicle with a permissible total weight of 26 t. The biowaste bin in Frankfurt has a two-week emptying rhythm - but since April 2019 Stephanie Khiari and her colleagues have been emptying the biowaste bins weekly in two test areas in a pilot project in cooperation with the Environmental Agency of the City of Frankfurt. At the same time, Rosemarie Heilig, Head of the Environment Department, and the FES, through a large-scale campaign, have called on citizens to consistently separate organic waste and plastic waste, because good compost is only produced from pure organic waste.

A good example of the closed cycle of bio-waste is the collaboration between FES/Palmengarten/RMB: Frankfurt's green oasis, palm garden and botanical garden produce a lot of bio-waste. This is collected by FES, recycled in the RMB biowaste treatment plant and converted into biogas and high-quality compost soil. The compost returns to the palm garden as a natural soil improver. Stephanie Khiari, one of two drivers of the FES, chauffeurs the Mercedes-Econic through the partly narrow streets of Frankfurt. „Especially in the summer months the smell of organic waste is of course not the most pleasant, but you quickly get used to this side effect. I do my job very gladly “, says the mother of two children. For the campaign “Clothes make the man“ she went in front of the camera for the first time. People with unusual or dangerous professions are the focus of this campaign by tailor Stephan Görner and PR and event maker Sven Müller. At first they are photographed authentically in work clothes at their workplace. Afterwards they are dressed with noble, tailor-made thread by Stephan Görner and photographed in a beautiful location. In this way, great shots and exciting stories are created again and again, which are presented to the public. Recognition, respect and appreciation of professions and the people behind them, who usually do not work in tailor-made suits at the workplace, but without whom a city like Frankfurt would not function, are the message of the campaign.

The highlight of the campaign will be the Charity Gala “ Clothes Make People“ on Saturday, 2 November 2019 at the Hotel Kempinski Gravenbruch. Here, the six amateur models not only walk the red carpet in tailor-made suits or costumes, but also with five prominent personalities from politics, show business and sport at the VIP fashion show on the catwalk. The event serves the Leberecht Foundation. Over 120,000 euros have already been donated to needy children and their families. A varied programme awaits the ball guests. Tickets cost 250 Euro. Included is a 3-course candlelight dinner, all drinks of the evening and the show program. The gala will be moderated by Evren Gezer.

You can also find more information at: www.kleider-machen-leute.net