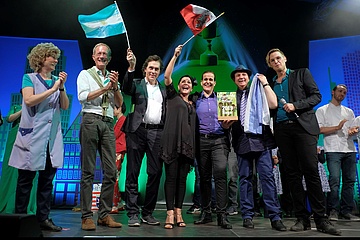 This past Saturday, another successful edition of the popular Green Sauce Festival came to a close. Once again, participants gave their all to surprise and delight over 5,000 sauce testers with their Green Sauce variants. In total, out of 49 green sauces, first 7 evening winners were chosen and then on Saturday the 2019 winner was chosen. When Fabiana Jarma won with Cocina Argentina on the 2nd evening of the festival and immediately performed a tango on the stage parquet with her partner, the ambitions were high to give everything again on the final evening. And so, once again, 50 liters of green sauce were prepared with much love and passion to convince the audience. And that's what Cocina Argentina did, coming out on top on a great final evening against the other evening winners, Junior Chefs Germany, Speisekammer, Bornheimer Ratskeller, BBS Himmelthal, Restaurant Prager Botschaft and Steigenberger Frankfurter Hof.

The Green Sauce Festival 2019 took place for the 12th time. The 12 stands not only in the European flag for perfection, unity and completeness, united is relentlessly pursued the goal: Green Sauce for everyone, everywhere! Even the creator of the festival, Anton Le Goff, was always at pains to convey this feeling of community and passion for green sauce when he hosted the evening shows. Always at his side was Timo Becker, who had already eaten his way through the sauces of the school classes in the young talent competition three weeks before the festival, and whose finale took place on Saturday at noon in the big festival tent. A total of 54 school classes were involved and competed with their sauces. The preliminary round of the finalists took place at various cultural venues in and around Frankfurt (nature school, Palmengarten, Saalburg, Film Museum, Schifffahrt, Dottenfelder Hof). At the final on Saturday, the supporting program was musically supported by the Landesjugendjazzorchester.

And of course the two gentlemen got support again from the indestructible festival herb: Hilde from Bornheim. With meaty sayings, sausage warm to the touch and her heart in the right place, the Wetterau plant was once again ready for a week full of Grie Soß. Together, the trio welcomed top-class artists to the show stage every evening alongside the 49 herb fighters - with charm, wit and plenty of green sauce.

At the market - accompanying the festival - the lived diversity of the Main metropolis could be enjoyed culinary at 27 market stalls under the motto "Green Sauce of Cultures". Lovers of the classic green sauce with eggs and potatoes got their money's worth just as much as friends of international cuisine, i.e. fiery variants with Argentine beef or Sicilian arancini, from oriental to Caribbean, from crepes, wraps and fresh tarte flambée salmon to granny's potato pancakes - the green sauce at this market the gastronomic world star!

Frankfurt-Tipp also congratulates the first place winners and of course Cocina Argentina, who won the votes of the festival audience for their Green Sauce as the 1st International Green Sauce in 12 years. We are already looking forward to the next Green Sauce Festival - and of course to the big GREEN Sauce DAY on June 6! Will you be there?