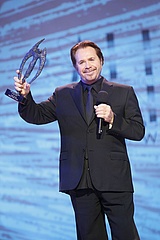 Klaus Peter Ochs has already achieved a lot in his profession. He has 300 employees in his 20 hairdressing salons in the Rhine-Main area. He is one of the ten best hairdressers worldwide and has been honoured several times as a top stylist with various awards. For 16 years he has also been the world president of Intercoiffeur Mondial, the worldwide association of successful 5-star hairdressers. This is where the latest trends and international hairstyle fashions are created.

2005 he received the Order of Merit of the Federal Republic of Germany for his social project Education for Life, which gives young people who are not on the sunny side of life, the opportunity to get a chance in life through a qualified education in schools built by him.

Now Klaus Peter Ochs received a special honor. As the first German in the hairdressing scene, Ochs was awarded the International Legend Award 2016 by the international trade press AIPP (Association International Press Professional Coiffeur) and the AHS (Alternative Hair Foundation) in mid-October in London, on the occasion of the Alternative Hair Show.

Klaus Peter Ochs received the award for his unique style, attention to detail and thought-provoking ideas. He combines fashion and environmental awareness in projects such as Arctica - save our planet.

Ochs stands for beauty, he is a champion of craftsmanship and a master of great staging. His collections and mood videos are snapshots of the zeitgeist, his international shows are celebrated worldwide, and whatever he stages is marked by his unerring sense of fashion news. Imagination is his great gift.

At the laudation at the Royal Albert Hall in London, AIPP Secretary General Sergi Bancells announced to the applause of the 5.000 attendees, "It is a special pleasure to present the coveted International Legend Award 2016/2017 to hair icon Klaus Peter Ochs."