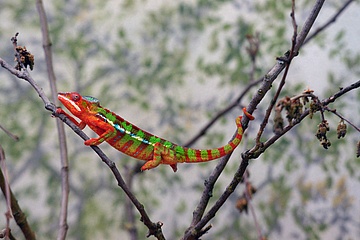 Panther chameleons are particularly colourful. Their color change is not, as many think, for camouflage but changes depending on the mood of the animals. Frankfurt Zoo has named the panther chameleon its "animal of the month" for the month of May. From May 1 to 31, you can learn more about these fascinating animals at a show feeding every day at 3pm.

After being unable to show panther chameleons (Furcifer pardalis) for about a year, Frankfurt Zoo is now keeping four animals again: one pair in the show and another pair behind the scenes. "Panther chameleons are distinctly solitary animals due to their aggressiveness. They are therefore housed in separate enclosures and only left together during mating season," explains zoo director Prof. Dr. Manfred Niekisch.

The male in the show sits in the ray tortoise enclosure. This male is particularly easy to see during feedings. Because panther chameleons cannot see standing water and therefore cannot drink it, the terrarium must be sprayed with water steadily, five times a day.

The males are also quite colorful with their green-blue iridescent pattern. The coloration of the animals can change, however, and depends in each case on their distribution area and mood. "If the animals are stressed, the color changes to dark to black, if they are threatened, they take on a bright warning color and if they are in a courtship mood, the green-blue glows all the stronger - so the mood of the animals is always obvious," said zoo director Niekisch.

Panther chameleons tend to be sluggish in cold weather, as reptiles areothermic. "However, their tongues are just as fast in cooler temperatures as they are during the day, which allows them to hunt insects well at night," Niekisch explained. The warm elastic connective tissue of the tongue, which does not cool down as quickly as the animals' bodies, is responsible for this phenomenon.

Panther chameleons live in Madagascar in bushes, trees or undergrowth near the coast. With their thin legs, they can climb well and are very agile. They can also hold on to branches in strong winds with the help of their feet, which are shaped into pincers. They grow to be about 35 to 55 cm tall