Colorful anniversary year in the Theatrallalla
from FFM Aktuell 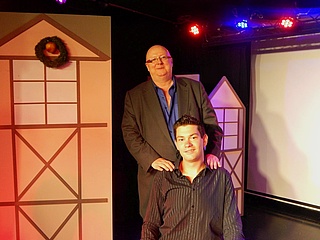 Next year, Frankfurt's cult figure Bäppi La Belle celebrates its 25th anniversary. For Thomas Bäppler-Wolf, this is of course a reason to celebrate. But it's not just the Bäppi anniversary that will provide plenty of variety at the Theatrallalla Theater on Friedberger Landstraße in the coming season. Since 2013, not only the popular Bäppi show has been staged here, but also plays, musicals, comedy - and simply everything that is fun and somehow a bit weird. One thing is particularly important to Thomas Bäppler-Wolf: he wants to offer his audience exactly what they appreciate about the theatre and, of course, about Bäppi. At the same time, however, he always wants to try out new things in order to expand his theatre's range and make it even more versatile.

There are certainly experiments that don't work out so well. Others, however, hit the spot, like the wonderful Schlager revue "Verliebt - Verlobt - Verheiratet", which has even been given a no less successful sequel. But also the very weird Walter Bockmayer adaptations "Sissi - Beuteljahre einer Kaiserin" and "Cleopatra und der Fluch der Tempelhuren" were so well received that they can be seen again at the beginning of the coming season. And of course, the current Bäppi show"Hessisch fer Aafänger" continues from September until spring 2018. And the acclaimed adaptation of "Fledermaus" will also return to the small theater in the North End once again in April 2018.

But the anniversary season also has new things to offer, of course. For example, on June 02, 2018, the big anniversary concert "THIS IS MY LIFE.25 years of Bäppi La Belle" will take place at the Capitol Offenbach. Before that, the Theatrallalla will present a very special premiere in November 2017: After being authorized by the heirs of Curt Goetz, Thomas Bäppler-Wolf has transformed the classic "The House in Montevideo" into a musical, with new songs composed by Gabriel Groh and written by Bäppler-Wolf. One can be justifiably excited about that. From April 2018, the new Bäppi programme will then be on show, bringing together the best of 25 years of Bäppi in one show.

New ground will also be broken by the format "Bäppis Couchgebabbel" which resumed this spring, with the next edition in September. This will not take place as usual in the Theatrallalla, but above the rooftops of the city in the 22nd Bar at the Innside Melia Hotel Frankfurt Eurotheum. Guests expected on 10.09.2017 are head of culture Ina Hartwig, magician Harry Keaton and Alexander J. Beck, actor and artistic director of the "Theater Alte Brücke". If this change of location is well received by the audience, Thomas Bäppler-Wolf can well imagine having the Couchgebabbel take place at different locations in the future. We are curious!

But that's not all that's planned for the next season: Bäppi wants to bring children's theatre to the Theatrallalla together with Marcel Schilling. With an adaptation of "Alice in Wonderland" young audiences are to be introduced to the theatre. A comedy reading of the "Ring des Nibelungen" and a Hessian version of Kleist's comedy "Der zerbrochene Krug" are also on the program. But that's good, isn't it? No, because the"Lisbet Windsor Thermomix Kochshow" will also continue in its third year with four dates, in spring 2018 there will be the GFF - Gemeinschaft Frankfurter Fassenacht Kostümsitzungen at the Theatrallalla and also the Ball Pompös is to be relaunched after its successful debut in 2018. And then there is a real project of the heart that Bäppi would like to fulfil from January 2018: a TV format on the internet that will come from a different cider pub every month. The name "Lieber blau als gar kein Bock" suggests which successful format will be paid tribute to here. The recording of the pilot episode is for 24.10.2017 in the "Schönen Müllerin". The first regular episode is then to be created on 22.01.2018 in the restaurant "Zum Rad" in Seckbach. More on this of course also from us in time for the start of the format.

Bäppi and the whole Theatrallalla team have a lot planned for the next few months. We are already looking forward to an amusing, colourful and surprising anniversary season and wish Bäppi all the best for the next 25 years!

You can also find more info at: www.theatrallalla.de