Confusion after Tagesthemen report - Great Christmas Circus is coming back to Frankfurt!
from FFM Aktuell 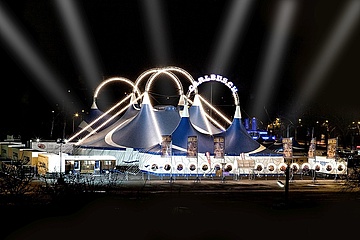 When it was recently reported in a report of the Tagesthemen about the existential fears of many circuses in Germany, there was also the talk of the "Circus Busch from Berlin", which is on the verge of ruin because of Corona. After the report the team of the Circus Carl Busch received numerous inquiries whether it the Circus and thus also the popular Great Christmas Circus in Frankfurt in the future no more will give. But the all-clear can be given: The Circus Busch from Berlin is NOT the Circus Carl Busch, but a namesake.

Naturally, the Corona crisis is also a challenging time for Circus Carl Busch, says press spokesman Sven Rindfleisch. In particular, the uncertainty of when it can start again would tug at everyone's nerves. But it is important for the team around Manuel Wille and Natascha Wille-Busch to say that the circus is doing well and that they have come through the crisis so far without outside help.

Since the beginning of the Corona crisis, the circus has been in its winter quarters in Dürrwangen, Franconia. Attempts have been made to make the best of the difficult lockdown period. Piece by piece, the winter quarters were modernized, the fleet was overhauled, new show ideas were worked out and new horse dressages were rehearsed.

Of course, one focus for the team is also the preparation of the 8th Great Christmas Circus Frankfurt. All are very optimistic that it will be from 17.12.2021 to 9.1.2022 on the Festplatz am Ratsweg again "Manege frei für den Great Christmas Circus" heißen, says Sven Rindfleisch, followed by a promise to the loyal Frankfurt audience: after the forced break this Christmas season, the Great Christmas Circus will come back stronger than ever with an absolute world-class program. Tickets are already available on the brand new website www.great-christmas-circus.de and at all known advance booking offices.