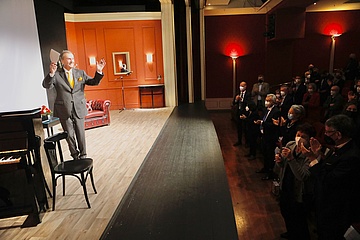 He runs two popular theaters in Frankfurt and has been providing extremely good entertainment to visitors of the two houses for decades. After not being able to celebrate his 25th anniversary as director of the Fritz Rémond Theater in 2020 and his 65th stage anniversary on March 13, 2021 due to the Corona pandemic, there was now a celebration for Claus Helmer on his 50th anniversary as director of the Komödie Frankfurt for the actor, director and theater manager. In 1972, at the age of just 28, Helmer took over as director of the tradition-rich boulevard theater, succeeding Helmut Kollek, who had founded the stage in 1950. At the ceremony on Monday, February 28, the two other anniversaries were then also celebrated.

Mayor Peter Feldmann said during the festivities: "Even if we do not feel like celebrating because of the current situation, Prof. Claus Helmer would have earned the proverbial 'big station'. For it is simply impossible to imagine Frankfurt without this triple jubilarian. He has made the Komödie an institution, saved the Fritz Rémond Theater and made us laugh and think on more than 5,000 evenings on the boards that mean the world not only to him. Claus Helmer stands for the breadth of cultural offerings in our city. While the Schauspielhaus across the street is making a name for itself with daring productions, his focus is on the comedy. The simple story, close to life. When we laugh with him and at him, we also laugh at ourselves. Claus Helmer looks into our souls. He gives us beautiful hours. For this we thank him sincerely - with a place in our hearts and a reception on July 21 in our 'Gudd Stubb', the Kaisersaal. "

Culture and Science Department Head Ina Hartwig added: "For half a century, Prof. Claus Helmer has led the fortunes of the comedy with his inimitable passion for the art of theater and his Viennese charm. I would like to congratulate Claus Helmer most warmly on this absolutely extraordinary and impressive achievement and express my special thanks to him for his extremely valuable and continuing cultural commitment to our city! The fact that Claus Helmer has also been managing a second large private theater in Frankfurt, the Fritz Rémond Theater, for more than 25 years illustrates the singular position he holds in Frankfurt's theater landscape. Last but not least, Claus Helmer, who made his debut at the Burgtheater in Vienna at the age of twelve, has been on stage himself as an actor for 65 years and has delighted generations of visitors with his infectious charisma and subtle humor. I very much wish that Prof. Claus Helmer will continue to enrich Frankfurt's cultural life for a long time to come and continue his extremely successful work in our city!"

Helmer was born in Brno on February 23, 1944. He spent his childhood in Vienna. He first appeared on the theater stage as a twelve-year-old in Max Melle's 1956 production of "Joan of Arc." From 1959 to 1962, Helmer studied acting at the Max Reinhardt Seminar in Vienna. After working in Aachen, Düsseldorf, Hamburg and Stuttgart, he came to Frankfurt am Main in 1965. He has been director of the Komödie since 1972, and in 1995 he also took over as director of the Fritz Rémond Theater. Helmer has directed numerous plays and has often appeared on stage as an actor himself. He has received several awards for his artistic work, such as the Federal Cross of Merit in 1998, the Hessian Order of Merit in 2004 and the Goethe Plaque of the City of Frankfurt am Main in 2017.