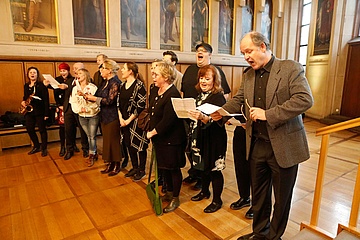 (ffm) Lord Mayor Peter Feldmann and Head of the Department of Culture Ina Hartwig congratulate the Fliegende Volksbühne and its founding father and director Michael Quast on their tenth anniversary. Since 2008, the Fliegende Volksbühne has been presenting Frankfurt dialect theatre in conjunction with new forms of theatre, current Frankfurt topics and authors at various venues in the city. For Lord Mayor Peter Feldmann, the work of the Volksbühne is not only an enormous enrichment of Frankfurt's cultural scene: "The ensemble brings Frankfurt's past charmingly into the present &mdash; and shows that names like Friedrich Stoltze are no more out of time than our folk theatres themselves. The Volksbühne appeals to the entire population of Frankfurt and is loved by the people of Frankfurt. I take my hat off to these years of commitment." The summer festival "Baroque on the Main" was founded back in 2005 in the garden of the Bolongaro Palace, played to sold-out crowds from the very beginning: "A true success story," says Peter Feldmann.

Deputy Head of Culture Ina Hartwig paid tribute to the work of Michael Quast and his team at a reception in the Kaisersaal of the Römer. "Thanks to Michael Quast, Frankfurt dialect has experienced a renaissance and is popular with audiences across the generations. At the Volksbühne, the old Rotfabriker from Höchst and the linguist from the Westend campus, the pensioner from Sachsenhausen and the young family from Riedberg meet."

Michael Quast found artists who embodied exactly what both Moli&egrave;re and Wolfgang Deichsel had in mind with his Hessian variant. And he formed an ensemble that not only shaped the Volksbühne professionally, but lives on to this day.

"Michael Quast has staged the political dimension of dialect as direct speech. As a protagonist, he thus also always embodies a piece of political radicalism. The theatre of the Flying People's Stage has nothing harmless about it at all, on the contrary, it is inherently explosive," said Head of Culture Hartwig in her speech in the Kaisersaal.

From October 2013 to May 2015, the Cantate Hall next to the Goethe House in Frankfurt served as the venue. After a conversion and new construction of the Goethe-Höfe area, where the new Romanticism Museum will also be built, the Cantate-Saal will become the permanent venue of the Fliegende Volksbühne. "The colourful characters of Moli&egrave;re can be embodied so truly by Michael Quast also because he is a Romantic soul at heart. And so it comes full circle that the permanent landing site of the Fliegende Volksbühne will be located in the immediate vicinity of the Romantikmuseum," Hartwig concludes