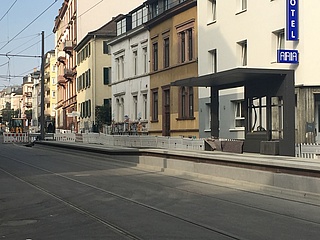 Station "Glauburgstraße" in operation from the end of October

(pia) As last announced, the U5 line is expected to start its operation on Monday, October 10, and will call at the barrier-free station "Musterschule". Work on the "Glauburgstraße" station is expected to be completed by the end of October, so that the station can be served by the new "U5" subway cars from October 31.

Eckenheimer Landstraße will reopen to regular traffic on October 10 between Anlagenring and Glauburgstraße. North of Glauburgstraße, it will remain closed as far as Oeder Weg for the final phase of construction until the end of October; access to businesses will continue from the north via a logistics lane. Motorists are asked to avoid the area via Oeder Weg or Friedberger Landstraße. 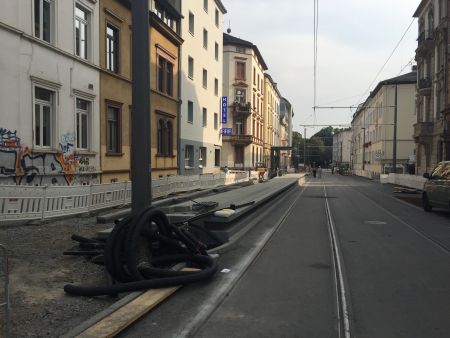 As soon as the end of September, residents and abutters will have to prepare for a change: Starting Monday, September 26, the parking spaces in the middle of Eckenheimer Landstraße will be removed. These will be on the tracks, and test runs are to take place even before the tram goes into service on 10 October, for which the tracks will have to be cleared. As a replacement, parking spaces will then be available in the lower part of Eckenheimer Landstraße.

Two stations out of service

The use of the modern "U5" subway cars brings another change, which was already announced in the course of the presentation of the barrier-free conversion of the U5 line: North of the Alleenring, the stations "Neuer Jüdischer Friedhof" and "Eckenheimer Landstraße / Marbachweg" will go out of service, as they cannot be served by the high-floor cars. The latter will be removed without replacement, as the station "Marbachweg / Sozialzentrum", which is "around the corner", was modernized barrier-free in 2013; the new construction of the station "Neuer Jüdischer Friedhof" is planned, a date for the construction cannot be given bindingly at the moment.

In October, VGF is planning further work along the U5 as announced: at the Eckenheimer Landstraße/Marbachweg intersection, VGF will then install a new switch and a switch crossing for the branch of the main line from Hauptbahnhof - Preungesheim. From Monday, 17 October, at around 2 a.m. until Wednesday, 2 November inclusive, the U5 line will only run between Hauptbahnhof and Hauptfriedhof. Between Hauptfriedhof and Preungesheim, the VGF will operate a replacement service with articulated buses running at the usual U5 frequency. Subways are then scheduled to resume running with the start of operations from Thursday, November 3.

In order not to obstruct car traffic too much at the junction of Eckenheimer Landstraße/Marbachweg, the work will have to take place during the autumn holidays. As reported in the meeting of Local Council 3 on 8 September, VGF was still trying to bring this work forward into the summer holidays so as not to disrupt the U5 again immediately after its partial commissioning on 10 October. Unfortunately, the manufacturer was not able to comply with VGF's request to bring forward the delivery of the turnout.