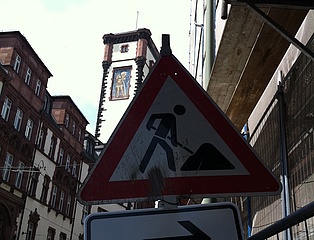 (kus) In the first half of 2017, Verkehrsgesellschaft Frankfurt (VGF) completed its major track construction works as planned. On the "A line", Eschersheimer Landstraße with the lines U1, U2, U3 and U8, in Nied the line 21 and in Niederrad the line 12, tracks and switches were repaired or replaced until the summer holidays. During the work, the VGF had organized and handled extensive replacement transport with many buses and drivers; the operation of subways and trams could then be resumed as announced.

Until 31 December, further work on tracks, switches, stations, stops and lighting will follow. They are necessary to maintain the network in perfect condition and thus - entirely in the interests of passengers - to keep the underground and tram lines running smoothly. In addition, station and stop modernizations as well as elevator retrofits serve to create or expand accessibility. In this way, the VGF is significantly improving the service and its use for all passengers.

For passengers - but also for residents, business neighbours and motorists - such work may be a nuisance. But they cannot be prevented, because the constant stress to which the rail tracks in particular are subjected leads to wear and tear. The VGF must prevent this. Financial aspects also speak for the timely start of modernisation and maintenance of the infrastructure: although individual and repeated repairs and touch-ups - such as welding work on tracks and points - can extend the service life of the facilities, this does not achieve a sustainable improvement.

The work listed under the following 19 points can have different effects on line operations, individual traffic or residents. The expense is significant even if they do not involve service interruptions or road closures. For example, by the end of the year, a total of around 3,600 meters of track will be replaced - i.e. completely renewed - including new frost protection over an area of more than 12,100 square meters. Twelve points will be replaced or newly installed. In addition, countless joints will be welded, asphalt surfaces renewed and tracks that have received new ballast will be tamped.

The work in detail:

28. August to September 10: Track construction Johanna-Tesch-Platz
Service interruption of the U7 line between Eissporthalle and Enkheim. The U4 line will run as far as Enkheim. Rail replacement service (SEV) will be provided between Johanna-Tesch-Platz and Schäfflestraße. Obstructions to individual traffic due to construction traffic are possible.

From 25 September to 28 October, line 12 will be interrupted between Waldfriedhof and Rheinlandstraße due to track construction. Rail replacement services will be provided between Rheinlandstraße and Niederrad Bahnhof and back.

Line 12 runs between Rheinlandstraße, Eissporthalle, Riederhöfe, Zoo, Wittelsbacherallee, Bornheim Mitte and Rheinlandstraße. It is likely that there will be disruption to individual traffic and SEV due to high traffic volumes.

On 7 October from 7am to 1pm, one lane in each direction will be eliminated on Line 14 between Louisa Bahnhof and Zoo due to green cutting work on Wittelsbacherallee. Car traffic may be affected by this.

From 23 to 27 October: Due to track construction work at Unterer Kalbacher Weg, the U2 line will run between Südbahnhof and Riedwiese and between Gonzenheim and Nieder-Eschbach. The U9 line runs between Ginnheim and Riedberg. The SEV runs between Riedwiese and Riedberg and Nieder-Eschbach. Due to closure of the level crossing Unterer Kalbacher Weg, traffic is also obstructed.

On October 28 from 7 a.m. to 1 p.m.<//b> green pruning work will take place on Hanauer Landstraße. Line 11 will run between Zuckschwerdtstraße, Ostendstraße, Zoo, Wittelsbacherallee, Eissporthalle, Daimlerstraße and Schießhüttenstraße. An SEV will be set up between the zoo and Daimlerstraße via Hanauer Landstraße. Car traffic may be affected by the temporary removal of one lane in each direction.

On November 4 and 5, and November 11 and 12, the tunnel lighting of the U4 line will be renewed. For this reason, the U4 line will only run between Seckbacher Landstraße and Konstablerwache (shuttle train via track 1). Line U5 will run all trips to Bockenheimer Warte and line U7 will temporarily take on additional trips between Enkheim and Hausen.

The barrier-free upgrade of the Waldfriedhof Goldstein stop will continue until the end of September. The stops of lines 12 and 19 will be relocated, there are temporary platforms. During the work, parking in the street Am Försterpfad will be cancelled. There is no further interference with individual traffic.

From the beginning of October to February 2018, the Alt Fechenheim stop will be converted to be barrier-free. The stop of line 11 will be relocated with a temporary platform during this time.

The Louisa Bahnhof stop will also receive a barrier-free stop. Construction will continue from early December through March 2018. The stops of lines 14 and 17 will be relocated. It is expected that there will be no interference with individual traffic.

Still until December 2017, about ten bus stops in the city area will be upgraded to be barrier-free. No disruption to underground, tram or car traffic is expected.

By early 2018 the lift at Eschenheimer Tor station will be retrofitted. No disruption to subway or car traffic is expected.

From November 6 to December 9, the barrier-free light rail platform at tracks 4 and 5 at Ginnheim station will be extended. During the construction work, two platforms will always be available for the subway. There will be no disruption to the U1 line. On the U9 line, trains will turn around at Römerstadt station. An SEV will be set up. An impairment of car traffic is not expected