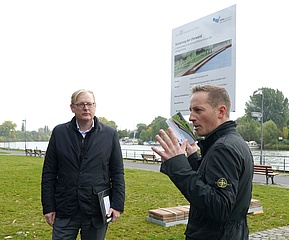 The banks of the Main in Höchst are a popular recreational area for Frankfurt residents. Especially on weekends, people like to cycle or go for a walk here. But for now, construction fences will dominate the scenery here. At the end of October, construction work will begin in the Batterie area for the redevelopment of the Main riverbank, which is expected to last until August 2018.

(kus) "The citizens of Höchst will once again be able to use their riverbank without restriction from next summer and will also receive a new area of around 450 square metres in a prime location," noted Councillor Frank. First, however, construction fences will once again be in place on the banks of the Main to allow for the redevelopment of the bank.

The right bank of the Main in Höchst is secured by means of a sheet pile wall that is close to 100 years old and was found to be damaged in 2015. Parts of the bank then had to be secured with construction fencing. In addition, the damaged area was stabilized as a first step to prevent further damage. The stabilisation took the form of pre-filling of grain material and armourstone in front of the damaged bank wall. Once the pre-fill was completed, planning began to rehabilitate the bank.

Due to the various damages, the rehabilitation is divided into three sections. In the first section of just under 90 metres, a new tieback and reinforced concrete spar will be installed. The stability of the sheet pile base will be additionally increased with injections of a cement suspension. A similar procedure is being followed in the final section of just under 120 metres in length, which is being stabilised with new tiebacks and a steel waling. In part of this section there are moorings of a landing stage for local passenger shipping, which will be retained.

In the middle section of about 150 metres, a new sheet pile wall will be constructed in front of the existing one. This is the most severely damaged section where it is no longer possible to strengthen the existing seawall. For flood protection reasons, the new sheet pile wall will be constructed with its upper edge about one metre lower than the existing bank. The existing Main riverbank promenade and the new, lower-lying area will be connected by two ramps and two staircases, so that the lower-lying area is also accessible to passers-by. The new area will have park benches, trash cans and lighting.

The majority of the work will be done from the water, but this will not interfere with navigation. During the castle festival next summer, construction work will be suspended as planned.

The upcoming renovation measure has been coordinated with the Waterways and Shipping Administration WSA Aschaffenburg, the Parks Department, the Office for Road Construction and Development, and the Road Traffic Department, among others. In the Europe-wide invitation to tender for the construction project, the company Colcrete-von Essen was able to prevail over its competitors and will take over the construction work under the management of the engineering office Schumacher. The client is the municipal HFM Managementgesellschaft für Hafen und Markt on behalf of the City of Frankfurt am Main