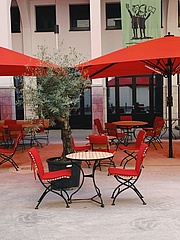 Finally, there is light at the end of the tunnel: from May 24, outdoor gastronomy is allowed to open in Frankfurt. Then we can finally enjoy coffee and cake or a delicious ice cream on the café terrace again, order our favourite menu in the outdoor area of a restaurant or simply sneak a pint in the garden of a "Gaddewertschaft". That hasn't been possible for so long and has been really lacking. Yes, it's good news, which has also been positively received by Frankfurt's gastronomic scene. Nevertheless, the mood is still far from euphoric: "We won't go full throttle right away on Monday," explains Sascha Euler, one of the owners of Naiv in Fahrgasse. "If the weather is good, we'll open; if it's bad, the Naiv will remain closed, or we'll just offer our food and drinks for takeaway, as usual. We will closely monitor how the situation develops." According to the Hessian state ordinance on Corona contact and operating restrictions, gastronomy in Frankfurt is allowed to open their outdoor areas on Whit Monday in stage 1, subject to conditions. Stage 2 also provides for the opening of indoor gastronomic areas, which is scheduled for June 7. Always assuming, of course, that the infection situation does not worsen again.

Kerstin Junghans, deputy chief executive of DEHOGA Hessen, sees in the now possible opening of the hospitality industry "a positive signal, especially since we could not imagine, looking at the figures two months ago, that an opening is conceivable with incidences around 100." However - and this is also a reason for the restrained joy - the conditions under which the hospitality industry is allowed to open are not economical; state aid must therefore absolutely continue to flow. The lack of economic viability is also what keeps Goran Petreski, owner of Vaivai in Grüneburgweg, from opening on Monday: "When I start up the machinery, I have to have the security that it will continue for a while. An up-and-down is too costly." Petreski prefers to wait and see, hoping to reopen in mid-June - when more easing is possible, according to the phased plan. "Until then, I will spruce up my restaurant and invest, for example, in a new kitchen and in digitalization."

In Frankfurt, stage 1 of the Hessian opening concept will come into effect from May 24: Negatively tested as well as vaccinated and recovered persons may be served in outdoor restaurants. If the incidence numbers remain stable below 100, stage 2 could start from 7 June: outdoor catering can then be visited without prior testing, the indoor area may open, a test is required for a visit there.

For Sascha Euler there are still some open questions, for example, concerning the examination of the test evidence. Kerstin Junghans has a recommendation for this for the restaurateurs - and thus also for the guests: "Guests should ideally be able to show a test from a test centre. This should be said directly with the reservations, because a test in the daily business and under the supervision of the restaurateur is only feasible with a manageable number of guests." As far as hygiene and safety measures are concerned, Euler is well equipped: "A year ago, we already purchased everything that could be purchased to give guests and staff as much safety as possible." For example, he has installed solid glass walls in the interior, as these have a long shelf life. He enclosed the outside area with a vestibule, which is also made of solid glass. Likewise, he had a new, modern ventilation system installed. "In total, our expenses amounted to more than 15,000 euros," says Euler.

Hotels ready for the new start

Frankfurt hotels are also allowed to receive tourists in Stage 1 under certain conditions. However, Christian Henzler from the Frankfurt Hotel Alliance states, "Frankfurt's city hotels will need the longest time - compared to other German metropolises - to be able to operate economically again. There are no major congresses in the pipeline in the next few months, the conference business is at rock bottom due to a lack of planning certainty and there is a lack of travellers from abroad." At the same time, he said, the opening prospect is a step in the right direction. "We can hope that as incidence levels continue to fall and tourist travel becomes possible again, businesses will also gradually lift their travel freezes and business travel will pick up." He added that most hoteliers had used the past few months intensively to further adapt their hygiene concepts, optimise processes and train staff to ensure a safe stay, and also to take into account the increased demands of international guests."

Further info on the topic can also be found at: www.coolebranche.de