Corona crisis: these are the current guidelines of the federal and state governments
from FFM Aktuell 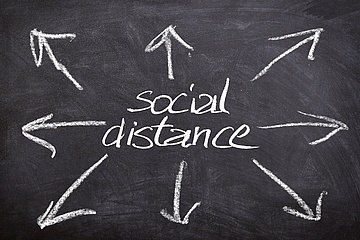 On Sunday, the guidelines of the Federal Government and the Länder in the fight against the spread of the corona virus were announced. The feared nationwide curfew did not happen, but nevertheless the regulations for staying outside the home were tightened once again. Following a detailed telephone conference, Volker Bouffier, Minister President of Hesse, once again made it clear that joint action by the federal states and the federal government in the corona crisis is necessary and will strengthen the population's confidence in the state's ability to act.

The measures adopted build on the regulations already in place in Hesse, with the aim of reducing personal contacts to a minimum.

"The situation is extremely serious. We must continue to minimize personal contacts in order to slow the spread of the virus. Nevertheless, we must remain level-headed. That is why we have agreed on a more extensive ban on public contact without completely isolating people", said Volker Bouffier, Prime Minister of Hesse, on Sunday in Wiesbaden. </The Hessian state government adopted the measures in a special cabinet meeting on Sunday evening. </p>

The key point is a further tightening of the already existing ban on contact in public space. In Hesse, too, from now on only groups of a maximum of two people are allowed to be in public together. Exceptions are only permitted if the persons belong to a common household.

Exceptions to the regulation

Exceptions to the 2-person limit in public are also groups of persons who must necessarily travel together for business and official purposes. Buses and trains are also naturally excluded from the regulation. They can therefore still be used. The Abitur examinations in Hessen can also continue to be held. The hygiene regulations must be observed. Closure of businesses

"I would like to thank all citizens who have already adhered to the measures that have been decided and continue to appeal to their reason and consideration", said the Prime Minister. "I am aware that our decision is accompanied by further restrictions on personal freedom. However, in the current situation it is essential that we all pull together and take responsibility for slowing down the spread of the virus. Further restricting personal contacts is the top priority," said the head of government.

In this sense: Stay at home! This is the only way we can get through this crisis #together further