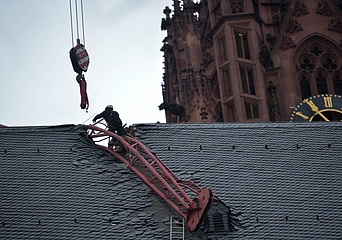 After the rescue planned for Tuesday had to be postponed due to still too strong gusts of wind, the crane boom, which had fallen onto the freshly renovated roof of the cathedral in the night from Monday to Wednesday morning, could be successfully lifted and then transported away. After the necessary safeguarding, the approximately 45-metre long steel part could be removed from the roof with the help of two mobile cranes. This took almost five hours in total, especially since extreme caution was required to avoid further damage to the cathedral. After successful recovery, the damaged components are checked to find out why the boom broke in the storm in the first place. Sealing and securing work is currently being carried out on the damaged roof. After their completion the cathedral and the cathedral tower can be reopened to the public. The Cathedral Museum is already open again from Thursday, 13 February. </Despite great challenges in difficult weather conditions, the specialists were able to successfully salvage the crane jib, which weighs around five tons," says mayor and church department head Uwe Becker. "Work is already beginning today to remove the traces of the accident at our landmark on the Frankfurt skyline as quickly as possible." </I am very relieved that the crane boom could be safely salvaged and that no further damage was caused to the dome," says Jan Schneider, head of the department for construction and real estate, who was also present during the salvage. "My thanks go to all those involved, from cathedral master builder Julia Lienemeyer, the architect of the cathedral restoration and the employees of the crane rental company to the city police and fire brigade, who prevented worse things from happening by acting quickly. Now the employees of the Office for Building and Real Estate can start repairing the roof, which has just been freshly covered. I am sure that soon the consequences of this tragic accident will be forgotten." </p>

The eastern and western roof surface of the southern side aisle were damaged by the fall of the needle boom. The ridge construction is also affected. The amount of the damage has not yet been determined. The roof is first of all waterproofed in a makeshift way to prevent rain from penetrating. The approximately 50-metre high crane has been used in recent years for roof and façade renovation at the cathedral. The regular dismantling was scheduled for Thursday, February 13. [