Cross of Merit on Ribbon for Joachim Kreuzer
from FFM Aktuell 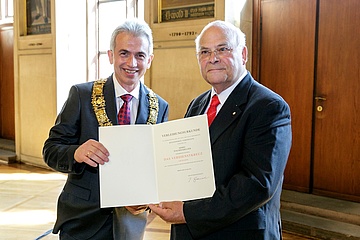 Kreuzer has, among other things, been a specialist adviser on the staff of the disaster control department of the city of Frankfurt since 1981 and was instrumental in coordinating the relief measures for the flood disaster in eastern Germany in 2002 and 2013.