Crowdfunding campaign for the Langer Franz
from FFM Aktuell 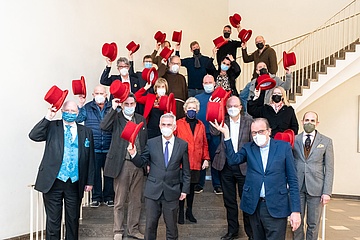 The reconstruction of the large northern city hall tower, commonly known in Frankfurt as Langer Franz, is a matter of the heart for many. From now on, all Frankfurt citizens can therefore do their part to ensure that the reconstruction of the spire can soon become a reality. So that the city gets back its Long Franz, Lord Mayor Peter Feldmann and Prof. Christoph Mäckler of the New Bridge Building Association call to donate for roof tiles, windows or other tower parts and to take over "sponsorships".

In addition to the 1.50-meter-high wooden model of the tower, which has been on display in the Römer since last summer, started on Thursday, 13. January, the second, important part of the fundraising campaign: Through the crowdfunding campaign on Startnext, citizens are given the unique opportunity to take on very special sponsorships - for example, for roof tiles, the filigree spire, the two coats of arms of Frankfurt, or even the dormers. Of course, there is also something in return for a sponsorship: as a thank-you, the names of the donors are immortalized on the Lange Franz. In addition, very special, exclusive moments with well-known Frankfurt citizens can be purchased, such as a private exclusive guided tour of the Römer with Lord Mayor Peter Feldmann, a guided tour of the Frankfurt Volksbühne with Michael Quast, an evening with Petra Roth and Christoph Mäckler or a guided tour of the Lange Franz with Konrad von Bethmann. Many great offers that invite to participate in the fundraiser.

Each amount is at the crowdfunding platform Startnext at startnext.com/derlangefranz and helps to make the tower reconstruction project a reality. For 40 euros, for example, you get a symbolic sponsorship for a wall stone, for 2500 euros a window of the Long Franz.

The first generous sepnder are also already found: Gustav and Ingeborg Stabernack have agreed to take over the sponsorships for the two new dormers of the Long Franz to be built. The Stabernack couple lost their factory and home in Offenbach, which had been destroyed by bombs, in 1943 and rebuilt a packaging production facility in Lauterbach in the Vogelsberg region. With their generous donation, the couple would like to thank the New Bridge Building Association and the city of Frankfurt for the reconstruction after the war. All major cities in Germany have rebuilt their town hall towers that were destroyed in the war. Only Frankfurt's town hall tower still has only a makeshift roof.

"The town hall tower was a landmark for those arriving in Frankfurt. St. Paul's Church, the Römer, the cathedral - this triumvirate long marked the historical center of the city," said Mayor Feldmann. "Without the spire of Langer Franz, more than just a few meters of stone and brick are missing. It is about identification and distinctiveness, a piece of urban history of the proud civic city of Frankfurt. It would therefore be an honor for the city and for me personally if we could rebuild the spire together with the Brückenbauverein and the commitment of the citizens. Hats off to all who are helping!"

"The Hamburg City Hall or the Munich City Hall would be unthinkable without their magnificent city hall towers. With every donation you help to give the city of Frankfurt back its historic tower and to make Frankfurt's history come alive. Craftsmen are also welcome to contribute to this reconstruction of the City Hall tower with their trades. Because every donation counts!" said the architect and chairman of the Brückenbauverein Mäckler.

With its imposing spire, the Town Hall Tower was the second tallest building in Frankfurt at the time of its construction, just behind the cathedral. But with the Second World War, the Lange Franz lost its hat, and despite the emergency roof hastily erected in the post-war period, it has unfortunately lost its significance in Frankfurt ever since. The tower was popularly named Langer Franz, after the popular and tall mayor Franz Adickes, whose office was located in the tower.

A 1.50-meter-high wooden model of the Long Franz, which was placed in the entrance area of the Roman, vividly shows the architectural details with which the spire originally adorned the town hall tower, and what striking characteristic of the New Old Town is still missing today.

Thanks to the fundraising campaign of the New Bridge Building Association, the reconstruction of the Long Franz is within reach after almost 70 years: The non-profit association has now collected more than 212,000 euros for the Long Franz with more than 400 individual donations. By the generous additional donation doubling action of Konrad von Bethmann of altogether 120,000 euro is already reached a good piece of the necessary sum of altogether one million euro.

Supporters of the fundraising campaign include

They all advertise to help and donate to give the city of Frankfurt back the city hall tower. So if you want to help give Frankfurt back a part of its original skyline, you should definitely participate in this fundraising campaign - every contribution helps!