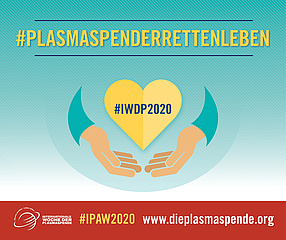 Worldwide, International Plasma Donation Week is taking place this week (October 5-9, 2020). The goal and purpose of this event is to raise awareness about the ongoing need for plasma donations for life-saving medicines.

People with immune diseases, in particular, need medicines that can only be obtained from the blood plasma of healthy people. However, due to the Corona crisis, there has been a decline in plasma donations over the past six months:"We are fortunate that plasma centers, as so-called critical service providers, were only affected to a limited extent by the Corona restrictions. Nevertheless, the numbers of donors have declined significantly during this time and we are happy about everyone who is willing to donate plasma", reports Damaris Kieckhöfer, head of the Frankfurt CSL Plasma Center, adding that in addition to new donors in general, people who have already survived an infection with Covid-19 are currently being sought because the antibodies in their blood can be life-saving, especially for high-risk patients.

Donor safety has always been a priority and currently the already high safety precautions and hygiene standards have been increased once again. Since the Corona crisis became known, a so-called pre-screening has been carried out in which, in addition to specific questions about possible symptoms, the temperature of the donors is also measured before the normal donation process begins. At the moment only donors and of course the staff have access to the center and there are enough additional disinfectant dispensers available. By the way, people with cold symptoms must - as always - take a break from donating.

Under www.plasma-spenden.de you can find detailed information about who is generally allowed to donate plasma, how the procedure works and also general information, such as the opening hours of the centers.

It is interesting to know that plasma donations by healthy people of legal age are possible up to 60 times a year - in contrast to blood donations, which may only be made four to six times a year. In doing so, one can relax for an hour listening to music, reading or relaxing and, in addition to the feeling of doing something good, receives an expense allowance based on the immediate effort depending on the type of donation.
Due to the current situation, only a few actions are planned at the plasma center itself this year as part of the International Week of Plasma Donation. CSL Plasma will use the campaign week to draw attention to the topic of plasma donation, especially online.

Further information is available directly from the Frankfurt CSL Plasma Center (phone: 069 887061) and on the website www.plasma-spenden.de.