Cultural highlights in the second half of 2019 in art, literature and festivals
from FFM Aktuell 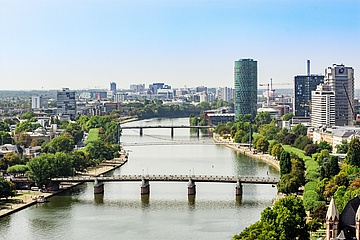 The past year has offered a lot of exciting and high-calibre things in cultural terms. However, 2019 will certainly not be in any way inferior to that. Because also in the new year the museums, theatres, city festivals or the fair will offer numerous cultural highlights. In the second half of the year (July - December) you can look forward to, among other things:

The love of van Gogh

140 paintings and works on paper, including around 50 central works, brought together from museums all over the world: from 23 October to 16 February 2020 van Gogh will be coming to the Städel. The exhibition "Making van Gogh. History of a German Love" sheds particular light on the role that German gallery owners, collectors, critics and museums played in the painter's success story. The second focus is on van Gogh's importance as a role model for German Expressionism. If you take a look at the Städel's collection while visiting the exhibition, you can draw wonderful comparisons there.

In its second autumn show, "Great Realism & Great Abstraction", the museum is showing a selection of around 100 drawings from its Prints and Drawings Collection, ranging from Max Beckmann to Gerhard Richter. It runs from November 13 to February 16, 2020.

Norway is the Book Fair's guest country in 2019 and has inspired two houses to mount exhibitions: With "House of Norway" (from 12 October), the Museum Angewandte Kunst is occupying its entire exhibition space with art, architecture and design from the Scandinavian kingdom and also providing an overview of impulses from fashion, sustainable tourism and culinary arts. And the monumental tapestries by Hannah Ryggen are moving into the Schirn Kunsthalle. Ryggen, born in Sweden in 1894, moved to a farm on the Norwegian coast as a young woman and thematized events and political conflicts in Europe in the 1930s and 40s in her works. She chose traditional Scandinavian weaving techniques for her depictions. The show "Hannah Ryggen" is the first large-scale solo exhibition of the artist's work in Germany. It runs from September 26 to January 12, 2020

On October 11, Ryggen will have company from Lee Krasner. The Schirn is showing around 100 paintings, collages and drawings, as well as films and photographs by Jackson Pollock's widow. Krasner is considered one of the most unflinching artists of the 20th century. The Schirn is dedicating Europe's first major retrospective of the past 50 years to her work.

Film Museum will be showing the artistic estate of actor, director and writer Maximilian Schell from 19 November. With a combination of scenic and multimedia staging, the house is betting on a new kind of presentation.

Frankfurt - always on the move

"Always on the move" is the title of the exhibition, which begins on 24 October at the Weltkulturen Museum. All over the world, people are and have been on the move, with them migrating lifestyles, languages, music, arts and crafts. Much of what is considered typical of a country turns out, on closer inspection, to be an import. With this show, the museum also poses the question of whether migration is really the cause of problems or rather an important motor for new ways of living together in a world that is constantly changing.

Frankfurt, too, is always on the move. Hardly any other city has changed its face so often in the post-war years. Starting on November 19, the Institute for Urban History will turn its attention to the innovation that the 1960s brought - the first subway, the construction of the Nordweststadt, citizen participation and protests, the Kennedy visit and Ausschwitz trials, culture and lifestyle are just some of the buzzwords.

In 2019, two long-awaited innovations are in store for the city: the Museum of Modern Electronic Music, or MOMEN, is scheduled to open in the summer. Located on the mezzanine level of the Hauptwache, it aims to be the first of its kind in the world to shed light on the origins of techno. In November, the Jewish Museum will celebrate its opening on Untermainkai. The renovated old building and the extension wing will merge to form a center for Jewish history in Europe. The Anne Frank Archive, which has been entrusted to the museum, will be on display there for the first time.

Friends of carousel rides, candy floss, of cider and vintner wine can hardly get out of celebrating in August and September. From 2 to 5 August is Mainfest along the Main and on the Römerberg; from 10 to 19 August apple wine festival on the Roßmarkt; from 23 to 25 August Museumsuferfest on Mainkai and Schaumainkai; from 28 August to 6 September Rheingauer Weinmarkt in the Freßgass' and from 6 to 15 September Dippemess on the fairground on Ratsweg.

For the Day of German Unity on October 3, the city invites you to a swinging citizens' festival on the Römerberg: Jazz zum Dritten. Admission is free. Music lovers can enjoy even more jazz at the German Jazz Festival in October.

From 15 to 19 October, authors will be reading from their latest works on the occasion of the book fair in the Römer, Kunstverein or Haus des Buches at Open Books and Literatur im Römer. Young bookworms will get their money's worth at Open Books Kids.

The City of Frankfurt invites you to the Open Day at the Römer again this year - it will take place on 26 October. One day later, on 27 October, thousands of runners will compete in the Mainova Frankfurt Marathon.

The year of events ends, as always, with the Christmas market on Römerberg, Paulsplatz and Stoltzeplatz. Rating Christmas trees, riding the carousel, eating bratwurst, drinking mulled wine and looking forward to the holidays goes from November 25 to December 22