Culture faces069 - An industry shows its faces
from FFM Aktuell 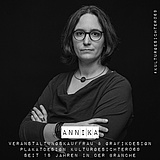 There's probably no one who hasn't experienced this in recent months: An event for which tickets had already been purchased had to be postponed indefinitely or cancelled altogether. We would love to go to a concert of our favourite star, experience a musical or a play again or laugh heartily about live comedy. That the Corona pandemic has hit the event industry as one of the first industries with full force and still holds it firmly in its grip is therefore clear to most people. But what is often forgotten: It's not just the people on stage who are affected. In fact, events of all kinds can only take place at all thanks to the work of the many people behind the scenes. These people, who have consciously chosen a job where you are not visible, but who contribute to the fact that we can all experience theater, music, fairs and similar events, should now be given a face with a campaign.

And that is more than deserved. After all, the events industry, the sixth largest industry in this country, is a hugely diverse one. This is also to be underlined by the Kulturgesichter069 campaign. The campaign was launched in Hanover and within a very short time numerous pre-selection areas joined in. The response within the industry was huge: in addition to the numerous "Möglich-Machern" around an event, many artists also joined the campaign.

In addition, numerous posters of the culture faces069 were created through the support of event manager and graphic designer Annika Kaiser (she is also one of the culture faces) and the printing company "Colour Connection" from Frankfurt. Almost 1400 posters are currently distributed throughout the Rhine-Main region. Within a very short time found numerous locations, advertising agencies and local businesses that support the campaign with the posting of posters, energetic.

Even though the entire industry has been in lockdown for over a year and suffers from regulations that do not always seem logical and comprehensible, the Kulturgesichter069 clearly distance themselves from Corona deniers and the cross-thinker movement. For the many people who work in the events industry, their job is not a profession, but a calling. A calling they want to return to as soon as possible. They want to do their part again in giving guests goosebumps and a "WOW experience" at an event. Once the pandemic has come to an end, it will take exactly these people to finally be able to quench the thirst for art and culture again.

Until that end comes, initiators Steffi Kunz, Hans Lechner and Florian Kunz will continue to volunteer on behalf of the industry for the campaign - and proudly so.

You can find all further info and posts on facebook at: https://www.facebook.com/Kulturgesichter069/