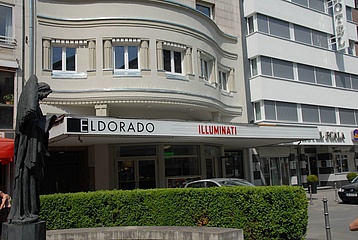 Frankfurt is losing what is probably its most traditional cinema: after the Berger Kino, the ELDORADO in Schäfergasse is now closing its doors for good. Already 110 years ago, the cinema was built under the name Scala by Emil Radke Filmverleih Strasbourg especially for cinematographic screenings. Over the years, a variety of different operators followed before the Jaeger Filmtheaterbetriebe took over Frankfurt's oldest surviving cinema on Klaus-Mann-Platz from the Bißwanger family as tenants in 1974.

The Jaeger family continued to run the film theater under the name ELDORADO ever since, following the family history of the first cinema, the EDEN at Lange Straße 22, opened in 1926 by grandfather Ludwig Reichard. This was followed in 1952 by the establishment of the EUROPA PALAST at Hauptwache, Zeil 125. For almost half a century, the ELDORADO was a favourite venue for many cinema fans. But unfortunately this is now over. It is with a heavy heart that the Jaerger family is giving up the arthouse cinema, which has been closed for over a year due to the Corona pandemic. However, it is a matter of the heart of the Jaeger family to maintain and continue the traditional family business, the EKINOS at the Hauptwache.

Now only the hope remains that the oldest cinema in Frankfurt will find a new cinema operator and not simply disappear from the scene. Because with that Frankfurt would finally lose an important piece of its cinema history. In a statement, the team of Filmtheaterbetriebe Prof. K. Jaeger thanks all guests for their many years of loyalty and the many beautiful and special cinema moments in the ELDORADO.