Cycling classic Frankfurt-Eschborn will be postponed
from FFM Aktuell 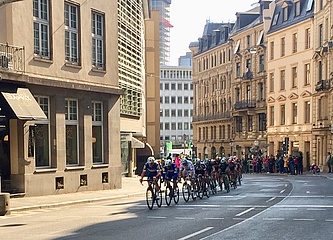 Markus Frank, city councillor and head of the department for economy, sports, security and fire brigade of the city of Frankfurt am Main, welcomes the decision: "The cycling classic belongs to the sports city of Frankfurt and especially for the anniversary the bike race deserves a celebration with everyone together. But in the coming weeks we will continue to focus on limiting the spread of the corona virus. Only then can we open up for an event summer. For this, the new date is firmly scheduled: on September 19, the 60th anniversary will be celebrated."

In addition to the professional race, the 20th ŠKODA Velotour, the Süwag Energie Nachwuchs-Cup races and the "kinder+Sport mini tour" will be moved to September. Related questions will be answered at www.eschborn-frankfurt.de and www.skoda-velotour.de.

Original report: After the popular bike race had to be completely cancelled last year due to Corona, the classic will also not be able to take place in 2021 on 01 May as is usually traditional. But there should not be a cancellation this year, but if possible only a postponement of the date. The cycling race will then be held in the autumn. The organizers want the race to take place in September or October. When exactly, however, is just as little clarified as the question of whether this major sporting event can actually be held in a few months.

The bike race once known as "Around the Henninger Tower" has made May 1 a cycling holiday in Frankfurt for more than half a century. A postponement had already been considered last year, but the pandemic situation did not allow the 2020. Now, however, vaccines are giving hope that things could be different in the fall of 2021 (despite the far-too-slow pace of vaccination in Germany).

Whether the great cycling classic, which has been bringing the cycling elite to Frankfurt since 1962 and attracts many thousands of enthusiastic spectators to the race course, will take place in 2021 for the first time on a date other than May 1 or will have to be cancelled altogether is therefore still completely unclear at the moment. What is certain, however, is that the signs are pointing to hope and that two anniversaries - the 60th edition of the cycling classic and the 20th birthday of the ŠKODA Velotour - can be celebrated in 2021 after all. We're keeping our fingers crossed!