Dalai Lama on visit to Frankfurt
from FFM Aktuell 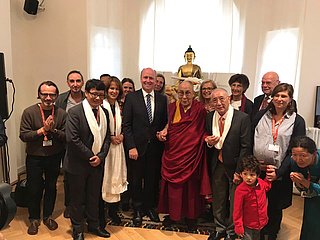 "His Holiness is intensively committed to peaceful and constructive dialogue among people. His tireless commitment to the understanding of peoples and religions, for which he travels around the world, is admirable. His committed advocacy for the necessary protection of Tibetan culture is admirable and deserves our support. Frankfurt, as the site of the Paulskirche, the cradle of German democracy, is a fitting address for a cultural centre that offers the opportunity for Tibetan culture to be practised peacefully on a foundation of freedom and human rights. I would wish that this could also be done so openly in China. I am convinced that China's state sovereignty can be well reconciled with safeguarding Tibetan culture as part of China's cultural wealth," Becker stressed.

The focus of His Holiness's three-day stay in Frankfurt will be a visit to the Tibet House, of which the Dalai Lama is patron, in addition to three events in the Jahrhunderthalle dealing, among other things, with the theme of global ethics.

As a cultural institute, Tibet House plays a unique role in Europe in conveying the ancient and modern culture of Tibet and serves as a meeting and study centre. It preserves and promotes Tibetan identity and brings it closer to its citizens. In over 300 events per year, the topics of Buddhism, society, art <x>ampersand</x> culture, healing and science are highlighted.

"The city of Frankfurt am Main is grateful for this contribution to cultural diversity. The Tibet House is a showcase of Tibetan culture from medicine to art to Buddhist religion and at the same time a bridgehead that carries Frankfurt's connection to Tibet. We are glad and happy to know that this institution is in our city and are pleased that the work carried out there is also appreciated by His Holiness the Dalai Lama," says Mayor Becker.

In Frankfurt, more than 170 nations and members of over 160 communities of all world religions live together peacefully. The dialogue between the religious communities and the city society creates community, trust and security. As a member of the Council of Religions in Frankfurt, Tibet House also participates intensively in regular exchange here.

"This is particularly significant in our day and age, when a non-religious worldview and value system poses new challenges to religious communities. Tolerance and acceptance are all the more important against this backdrop," elaborates Church Commissioner Uwe Becker.