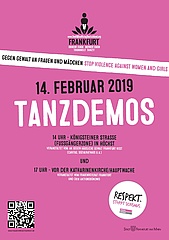 Worldwide Day of Action against Violence against Girls and Women

(ffm) The Women's Department, together with an action alliance, is calling for a dance demo against violence against girls and women. The action will take place on Thursday, 14 February, at 5 pm in front of the Katharinenkirche at the Hauptwache. On Valentine's Day, people all over the world dance the choreography of "Break the Chain". Dancing in public space here stands for strength and solidarity. Speeches will also be delivered in sign language.

V-Day - One Billion rising is an international day of action created in 2012 to highlight and protest the extent of violence against women and girls. One Billion refers to a UN statistic that one in three women will either be raped or be the victim of serious bodily harm in their lifetime. That's one-third of all women worldwide, one billion women. In the meantime, countries from all continents are participating with thousands of actions - from Barbados and Mongolia to Vancouver and South Africa. In Germany, the action takes place in over 150 cities.