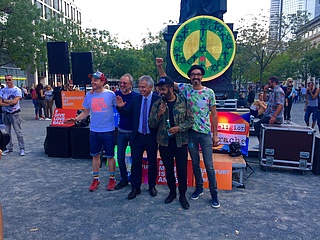 (kus) Artists, club makers and restaurateurs - they have joined forces to unite people of all skin colours, religions and world views on the Roßmarkt on September 1. "Love is our religion - music is our language" was the motto of the event, which not only wanted to set a sign against xenophobia and fear, like many politically influenced rallies, but above all for togetherness. The date was not deliberately chosen by organizers Sia Sanei and Christian Rindermann, and yet it was fitting: September 1 has been the official anti-war and world peace day in Germany since the 1960s.

Mayor Peter Feldmann assumed patronage for the colorful demonstration in downtown Frankfurt. "&sbquo;Love is our religion - music is our language' is a wonderful headline for an event that is all about understanding. Few things break down barriers - including barriers in people's minds - as easily as music. There is so much positive energy in it, so many memories that people share, no matter what their background. Whoever listens to songs and pieces together, whoever sings or dances, feels one", he stressed.

Sanei and Rindermann have been active in Frankfurt's nightlife as DJs and promoters for two decades. "For a long time we wanted to do something that didn't focus on commerce but on tolerance," Rindermann said. Little by little, the idea of the colorful, peaceful rally at Roßmarkt grew. Their event was meant to counterbalance the more political demonstrations of the past months: "We want to show that the world we live in is not a world to be afraid of. Frankfurt is European, international, trans-religious and tolerant."

Sia Sanei and Christian Rindermann got support from Alex Azary, Mengi Zeleke, Ata Macias, Moses Pelham, Chima and the Ardinast brothers, among others.