Date for the opening of the New Old Town is fixed!
from FFM Aktuell 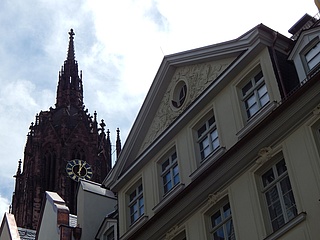 It was built for a long time, planned for even longer, but now the grand opening of Frankfurt's New Old Town, the DomRömer Quarter, is within reach. We'll have to be patient for a few more months, though, as the festivities will take place from September 28 to 30, 2018. Considering how long the topic of the "new old town" has already been causing heated discussions, the wait until then is rather short after all.

When the last construction fences have been removed and all commercial as well as private tenants have moved in, fresh life should be felt in the place steeped in history. The colourful hustle and bustle and life in the pubs and businesses are to be brought back to the heart of Frankfurt. In the 35 old town houses, 200 people will find a new home in around 80 apartments. Gastronomy, commerce and trade will contribute to the revitalisation of Frankfurt's city centre in around 30 ground floor spaces.

Frankfurt's interest in the New Old Town continues unabated. In the meantime, most people are looking forward to the opening (which was far from the case at the beginning of the construction phase). For this reason, and also because of the outstanding importance of the New Old Town and the quarter for the history of Frankfurt, the city administration is planning a big celebration for the official opening in September 2018. Around 500,000 people are expected to attend the weekend of festivities. Numerous institutions such as the Institute of City History, the Stadthaus, the Historisches Museum, the Schirn, the Archaeological Museum and the MMK Museum of Modern Art will be involved in the celebrations. In addition, a wide-ranging cultural and musical accompanying programme is planned.

After the completion of the DomRömer-Quartier, preview open days are planned, among other things, so that despite the limited space and narrow alleys, as many interested people as possible can be informed about the architectural, cultural and business offerings of the new old town as part of special guided tours.

We will continue to keep you updated.