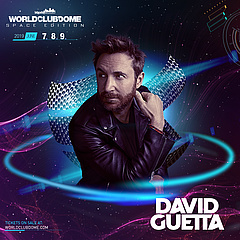 Great news for fans of electronic music: The upcoming edition of the WORLD CLUB DOME festival has a prominent addition: The multiple award-winning megastar DAVID GUETTA returns to the “largest club in the world“ in 2019. With this he makes the line-up, to which greats such as Armin Van Buuren, Paul Kalkbrenner, Capital Bra, Don Diablo, Dimitri Vegas & Like Mike, Lost Frequencies or Marshmello belong, even more attractive.

Without him Clubmusic wouldn't have the status she enjoys now. He has playfully mixed the most different genres in electronic music and mixed up the charts all over the world. For more than 10 years his hits have been storming the hit lists worldwide and he the stages of all major festivals. For over 10 years he has been part of the BigCityBeats Family and the Frankfurt brand would not be where it is now without him.

„BigCityBeats is also part of my story,“ said the Frenchman at his last guest performance at the BigCityBeats WORLD CLUB DOME. Now he is looking forward to his return to Frankfurt. For the Space Edition of the “largest club in the world“ on June 7/8/9, 2019, this should be a truly magical night under the Frankfurt starry sky.

You can also find more information under: Https://www.worldclubdome.com/