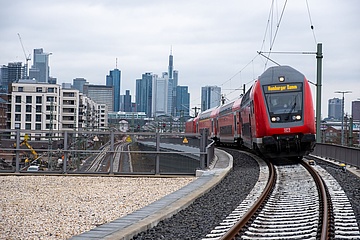 There will be a lot happening on Hesse's rails in the coming months. Because Deutsche Bahn (DB) has announced that its investment program "New Network for Germany" will be consistently continued. This year, for example, the record sum of 13.6 billion euros is to flow into the rail infrastructure nationwide from DB, the federal government and the states - that is around 900 million euros more than in 2021.

From this sum, around 1.55 billion euros will be available for the network and stations in Hesse in 2022. DB intends to use the money to renew and modernize around 210 kilometers of track, 210 switches and eight bridges. DB is also tackling 65 stops and stations - including Friedrichsdorf, Hanau and Mainz-Kastel. With this program, DB aims to make the existing infrastructure more efficient and create more capacity in the rail network and stations. In Frankfurt, a number of projects are to be driven forward: For example, two new tracks are to be built between Stadion and Niederrad, the line between the main station and Neu-Isenburg is to be upgraded, and the four-track expansion between Frankfurt-West and Friedberg is to continue. Passengers on the Frankfurt-Maintal-Hanau line are also to benefit from clear improvements in the future thanks to the connection to the S-Bahn network. DB is working on the construction of a rail overpass in Hanau for this purpose in 2022. However, all these projects will still take a long time, in some cases several years, before they are completed.

Ronald Pofalla, DB's Chief Infrastructure Officer, sees the investments as the right way forward: "We are building more than ever before - a real tour de force! We can only succeed with a strong team, with motivated and committed employees." That's why DB is continuing to build up its 2022 teams: 470 additional engineers and specialists for expansion and maintenance will be newly hired in Hesse this year.

This year's investment offensive has two major focuses: First, DB is creating more space on the rails. To this end, it is continuing with the expansion and new construction of important infrastructure projects at a high level. Second, DB is pushing ahead with its digitization projects, for example by building the Gelnhausen electronic interlocking, which is being constructed on the Hanau-Gelnhausen expansion line.

Both - more capacity and digitization - are prerequisites for more and faster connections and the Deutschlandtakt. "A strong infrastructure is the basis for an attractive offering for all rail passengers. That's exactly what we're about: convincing more people to use rail as an environmentally friendly mode of transport. Every euro invested in rail is therefore also a euro invested in climate protection," Pofalla continued.