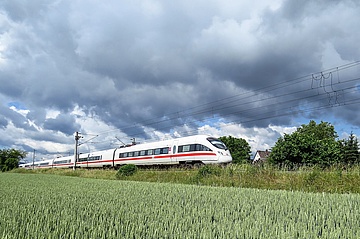 The rail network between Frankfurt and Mannheim is to be significantly relieved in the next few years. Twice as many long-distance trains are to run between the Main metropolis and Mannheim, with the ICE taking just 29 minutes to travel. In addition, there is to be more space for additional local traffic and freight trains. To this end, the railway is building two new tracks. Between Zeppelinheim and Lorsch, the planned line will run along the A5 and A67 motorways, then between Lorsch and Mannheim largely in a tunnel. Darmstadt will also be connected to the new line. The building permit process for the first section of the line between Zeppelinheim and Darmstadt North is due to start next summer.

Ronald Pofalla, DB Board Member for Infrastructure, explains the plans: "We want the transport turnaround in order to achieve our climate protection targets. For this, Germany needs strong rail. With the new high-speed line between Frankfurt and Mannheim, we are making a significant contribution to this. Today we have reached an important milestone. My special thanks go to all members of the Participation Forum who have critically and constructively accompanied the route selection process over the past four years. We will of course now continue this dialogue, in parallel with the planning approval procedures that will now follow."

Tarek Al-Wazir, Hesse's Minister for Economic Affairs, Energy, Transport and Housing, added: "The transport turnaround is only possible with a strong railway. Rail travel must be fast, comfortable and attractive. We have been working on these parameters in Hessen for years. That is why the state of Hesse, together with the federal government, worked intensively five years ago to bring the decades-old plans for the new line between Frankfurt and Mannheim out of their slumber and bring them into line with current requirements. This also included using the line for long-distance traffic during the day and for freight traffic at night. In short, today is an enormously important day for rail traffic throughout Germany. The new line will relieve one of the biggest bottlenecks in rail traffic in Germany at the Frankfurt junction, creating capacity for local and long-distance traffic and at the same time securing the connection to Darmstadt. In the end, this means better services for all rail passengers, whether local or long-distance, thanks to more trains and faster connections. At the same time, there is more space for freight trains and the protection of local residents from noise is taken into account. The chosen route is the result of an intensive dialogue process, which is indispensable for projects of this magnitude. And it shows: transparency, citizen participation and progress in the process are not mutually exclusive."

The route of the new tracks was planned after an intensive exchange between Deutsche Bahn and the region. In total, more than 30 possible routes were discussed and evaluated in terms of their respective advantages and disadvantages. Now it is clear: the route variant II.b that has now been decided on has proved to be the best variant in the sum of all the evaluation criteria.

A particularly important criterion in the decision was that with this route the fewest people will be affected by rail noise. The new line runs from Zeppelinheim to Lorsch along the A5 and A67 motorways, thus combining two infrastructures and avoiding new dissection of the landscape. In addition, the construction of the new line will be combined with the upgrading of the A67 in the Darmstadt to Lorsch area in order to keep construction-related disruptions to a minimum.

The new line in the corridor between Frankfurt and Mannheim will create new capacity for long-distance, local and freight traffic. The long-distance service between Frankfurt and Mannheim can be doubled with a hundred additional connections, and local services can also be significantly expanded. The routing makes a particularly short journey time between Frankfurt and Mannheim possible: 29 minutes instead of the previous 38 minutes. This makes it possible to introduce the Deutschlandtakt here. By relieving the existing tracks of the Riedbahn and Main-Neckar-Bahn from long-distance traffic, local traffic can also be expanded. With the route variant now found, Darmstadt can be connected to the Hessen-Express between Wiesbaden and Frankfurt Airport even before the entire new line goes into operation. The journey time between Frankfurt Airport and Darmstadt will then be only 15 minutes. At night, residents along the existing Riedbahn and Main-Neckar-Bahn lines will be relieved of freight traffic, as this will be diverted to the new line.

For more information on the Rhine/Main-Rhine/Neckar project, variant II.b and the participation forum, please visit: www.rhein-main-rhein-neckar.de