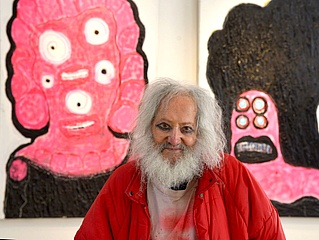 (ffm) The City of Frankfurt am Main honors the late Frankfurt artist Max Weinberg posthumously with the Goethe Plaque. He had died in Frankfurt on April 18 at the age of 90.

Just a few hours before his death, Lord Mayor Peter Feldmann visited Max Weinberg's current exhibition at Frankfurt's Chief Finance Office and then spontaneously visited him at his bedside to wish him a speedy recovery and inform him of the upcoming award. "To inform Max Weinberg personally about the appreciation he deserves was an important concern for me. Unfortunately, he was no longer able to win this last battle for himself. But even if he is no longer able to accept the Goethe Plaque himself, I hope that his relatives and fellow campaigners will be able to draw strength from this posthumous tribute," said the Lord Mayor. Feldmann paid tribute to Weinberg as a feisty and indomitable artist whose impressive biography is unparalleled even in a city like Frankfurt.

"We will not forget Max Weinberg and his work and will honour them in an appropriate manner. Max Weinberg was a true role model and moral compass not only for the artists close to him, but for all Frankfurt residents," said Ina Hartwig, head of the department of culture.

Weinberg was born in Kassel in 1928, fled Germany with his parents in 1933 and emigrated to Israel in 1935. After studying at the State Academy of Culture and Arts in Tel Aviv, Weinberg found himself prevented from continuing his artistic career in Israel and left the country.

He returned to Frankfurt in 1959, where he worked for several decades in a city-supported studio on Ostparkstrasse. On the occasion of his 80th birthday, the city of Frankfurt hosted Max Weinberg in a major exhibition in AusstellungsHalle 1A with an accompanying catalogue. Many large exhibitions in the Rhine-Main region followed.

The Goethe Plaque is awarded to poets, writers, artists, scientists and other personalities of cultural life ".whose work is worthy of an honor dedicated to the memory of Goethe," according to the official honorary order of the city of Frankfurt. The front of the plaque shows the portrait of Goethe, the back is decorated with a saying by the poet and thinker. The award of the city of Frankfurt is given a maximum of twice a year