Delicious collaboration between Paddington and ALEX
from FFM Aktuell 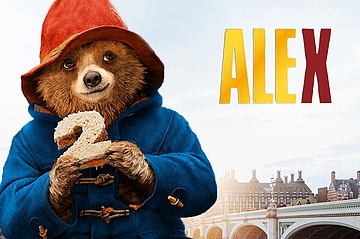 Paddington is back! The cute bear with a soft spot for orange marmalade returns to the big screens with a new adventure! For the cinema release (23 November) of the enchanting family film "Paddington 2" tunes the experience gastronomy chain ALEX their guests from now on with a very special action. In reference to the love of the clumsy bear for sweets ALEX spoils young and old not only with irresistible waffle baked goods, accompanied by Christmas&shy;lich fragrant cinnamon plum ice cream. Winter ice cream compositions such as&shy;wise almond ice cream with apricot-apple compote, marzipan potatoes and lots of chocolate are also on the menu. With a little luck, you can win an adventure stay at Europa-Park in Rust, great Paddington sets or free&shy;tickets to the cinema in an attractive competition all about the cuddly Master Petz (enter via Www.dein-alex.de/paddington).

ALEX, by the way, not only offers a nice pre- or post-cinema experience for the whole family with its sweet waffle and ice cream creations. In other ways, too, parents and children feel perfectly at home in the 39 Caf&eacute;-restaurants across Germany. This is shown by an independent study (by Goethe University Frankfurt, Welt am Sonntag and ServiceValue), which named ALEX the "Most Family-Friendly Unter&shy;take" within the German leisure gastronomy sector for the fifth time in a row in 2017!

And that's what the film, which features a top-notch cast (including Hugh Grant, Brendan Gleeson), opens in cinemas from 23 November:

The lovable bear Paddington, with his floppy hat and duffle coat, has not only found a home with the Brown family, he is also a valued member of the neighbourhood: Polite, courteous and always cheerful - plus everyone loves his jam sandwiches, which he never leaves home without. When Aunt Lucy's 100th birthday is coming up, Paddington is looking for a suitable present. He finds what he is looking for in the antique shop of the lovable Mr. Gruber, which holds all kinds of treasures: a unique&shy;kind pop-up picture book has done it to Paddington. However, the small, great&shy;pawsome bear must take on a few side jobs for it - chaos is inevitable. And then the book gets stolen too! Paddington and the Browns set out on the trail of the thief, who seems to be a master of disguise.

Part 1 had captured the hearts of over two million moviegoers in Germany in the winter of 2014/2015.

Further information about the film at:

In Frankfurt, the ALEX at SKYLINE PLAZA and the in THE SQAIRE at the airport are participating in this bearish cooperation