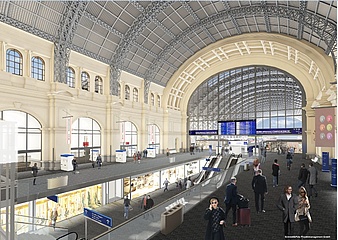 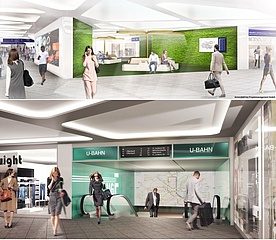 Frankfurt's main railway station may be THE transport hub in the Rhine-Main area, and it is also of great importance nationwide. After all, it is the second busiest long-distance train station in Germany after Hamburg. But you have to be honest: The station building is really only a jewel from the outside. Inside, on the other hand, the station is only partially inviting. Especially the B-level seems to be dreary, dark and dirty, accompanied by an often very unpleasant smell. Yes, this is really not the place to be. But this is to change fundamentally in the next few years. Deutsche Bahn is starting the long-planned modernisation of Frankfurt's main station and promises travellers and visitors a more open and brighter station. The shopping and gastronomy area will also be redesigned. Deutsche Bahn, the federal government, the city and the Frankfurt am Main transport company are investing around 375 million euros in this project. The station's problem child in particular is set to benefit from this first and foremost, as work will start on the B level, which is to be completely renovated by 2024.

The starting signal for the modernization will be given today, Monday, by Ronald Pofalla, Member of the Management Board for Infrastructure at DB AG, Tarek Al-Wazir, Hessian Minister for Economic Affairs, Energy, Transport and Housing, Peter Feldmann, Lord Mayor of the City of Frankfurt am Main, and Prof. Knut Ringat, Managing Director of the Rhein-Main-Verkehrsverbund.

Ronald Pofalla, Member of the Management Board for Infrastructure at Deutsche Bahn, says of this major project: "Frankfurt Central Station is not only a landmark of the metropolis, but is also one of the largest mobility hubs in Germany. The 500,000 daily travellers and visitors should feel at home here. Together with our partners, we are investing 375 million euros to give the station a new look. With the Frankfurt Central Station Master Plan, we are implementing a modern overall concept: We are providing an open design, inviting lighting and a completely new shopping and gastronomy area. In this way, the station will once again become a modern, attractive flagship for Frankfurt."

Tarek Al-Wazir, Hesse's Minister for Economic Affairs, Energy, Transport and Housing added: "The conversion of Frankfurt Central Station is an investment in more pleasant boarding and alighting and a pleasant stay for travellers. The railway as a climate-friendly means of transport will thus become even more attractive. For the next few years, however, rail passengers will need a little more patience - that's the way it is with major construction sites. Together with Deutsche Bahn, we in the State of Hesse are continuing to work in parallel on rail expansion so that not only arrivals, stops and departures in Frankfurt are pleasant, but also more capacity and an even better service are created for everyone who travels to or via Frankfurt or commutes to work in an environmentally friendly and comfortable manner. The State of Hesse is funding the modernization and, in particular, the barrier-free expansion of Frankfurt Central Station to a total of around 12 million euros. The measures have already been implemented to a large extent."

Peter Feldmann, Lord Mayor of the City of Frankfurt am Main, agrees with the positive basic tenor: "Our Frankfurt Central Station is about to undergo one of the biggest structural changes since its opening in 1888. As Lord Mayor of our home city, I am very pleased that this central gateway to Frankfurt is being adapted to the needs of the 21st century, not only technically but also visually. Of course, the historical silhouette of this building must not be lost in all the modernization. After all, our main station, which is used by more than half a million people every day, is a flagship of the city throughout Germany, just like the Main River and the skyline. But Frankfurt has always been and will always remain a city of change. Therefore, it is only logical that the face of the main station also changes."

Prof. Knut Ringat, Managing Director of the Rhein-Main-Verkehrsverbund finally: "Frankfurt Central Station is without a doubt the big hub of the network. Nowhere else do more people board RMV transport and every time the timetable changes, our passengers want one thing above all: even more fast direct connections here. With the conversion of the B level, our most important junction will soon shine in a contemporary guise and make it an attractive calling card for public transport."

The retread will, of course, take several years to complete, which also means there will likely be some inconvenience for commuters and travelers during that time. But the fact that the end result is one that will hopefully make the B-level in particular a truly more attractive and pleasant place to be definitely justifies it. We are excited and look forward to a more open, brighter and friendlier main station!