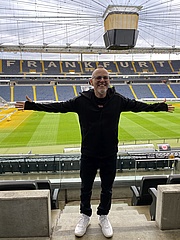 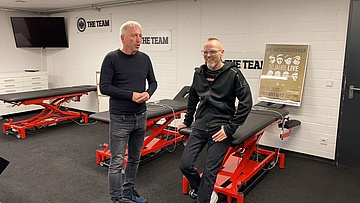 30 years of Fanta 4 - if this is not a reason to celebrate. No wonder that especially many fans want to celebrate this birthday with their idols. And so the tickets for the concert on 27 June in the Commerzbank Arena were sold out quickly. But don't worry: There is an additional date on 30 June, for which tickets are also available! Before the Fantastischen Vier will rock the stadium at the end of June, Thomas D has already had a look at the venue. At the local appointment in the Commerzbank Arena, the musician was enthusiastic: "I am really looking forward to our two concerts here.

Fitting the sports location, he also revealed: "For that, I'm training hard at the moment, doing a lot of sports - and I'll be really fit. I also advise all fans to warm up before the concerts." A special honour: The home booth of Eintracht Frankfurt is being transformed into an artists' dressing room especially for the band. Co-trainer Armin Reutershahn (who was co-trainer at the Fantastischen Vier-Heimatverein VfB Stuttgart in 2014/15) showed Thomas D the cabin during his visit to the stadium. Thomas D comments: "The great thing about football is that you don't know who will win before you do. The strategy for our concerts is that when we play, everybody wins. We always fight for it to be a great concert. Our aim is that the audience always gets the best version of the Fantastischen Vier. We're very self-critical, we discuss a lot." </And he revealed a special strategy from which especially the fans benefit: "Directly after the concert we don't pat ourselves on the back about how good we were, but talk about our performance - how we'll get even better. It remains a constant work on us for 30 years. We never want to be lame, slow, boring." And so far the Fantas have managed this very well, which everyone who has ever attended a concert of the band will confirm. </During his tour of the Commerzbank Arena, Thomas D also said: "On the day of a concert I can't eat anything. But the first time I have to eat something before the encores, otherwise I fall down. After the show, I'll really hit it." </p>

After the big stadiums and arenas were already three-quarters sold out by the end of the year, the Fantastischen Vier put on an additional show in Frankfurt's Commerzbank Arena and a third concert in the Barclaycard Arena Hamburg. For these shows, as well as the recently announced new shows, there are still enough tickets available at the moment. However, the demand is unbroken, so fans who do not yet have tickets should not hesitate too long.

tickets for the shows in Germany that are not yet sold out are available in all ALDI branches, at aldi-tickets.de and diefantastischenvier.de available. Tickets for Austria and Switzerland are available at the well-known advance booking offices and on diefantastischenvier.de. The fact that the tickets for the anniversary tour are sold exclusively in the more than 4000 German Aldi branches is a complete success for Thomas D: "We have been on the road for 30 years and have never sold so many tickets in such a short time. The advantages outweigh the disadvantages, the experiment has been successful: Because there is an Aldi branch on almost every corner, so every fan can simply go there and we can also give the tickets to our fans without fees and shipping costs. We discussed this before in the band and also with our fans. And especially with Aldi, who had never done this before."

Smudo, Michi Beck, Thomas D and And.Ypsilon celebrate their 30th anniversary not only live but also in the form of exclusive memories for their fans. So since summer 2019 all studio albums are released on vinyl. Among other things so far ‚Lauschgift‘ ‚Viel‘, ‚4:99‘ and for the first time also ‚Heimspiel‘ were reissued. Vinyl releases of the legendary ‚MTV Unplugged 1 + 2‘ and ‚Megavier‘ are in planning. </Since the beginning of the anniversary year in July 2019, a special exhibition called TROY has been dedicated to the Fantastischen Vier at the StadtPalais Stuttgart until the end of March. FANTAVENTURA is a VR-based remake of the song and video "Tag am Meer". On this incredible island, visitors meet the four band members of today and the twens of yesteryear at the same time. From 20.02.2020, fans will be able to download the software for their own four walls via the appropriate online platforms (including Steam). </p>

More information can be found under: diefantastischenvier.en