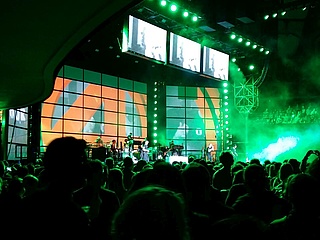 Die Fantastischen Vier have now been an integral part of the German music scene for over 27 years. Numerous hits, in which the Fanta4 have often gone very different ways and are thus not without reason as pioneers of German rap, testify to the musical qualities of the band. Although Michi Beck, Thomas D, And.Ypsilon and Smudo have also been on the road solo time and again in recent years, they are simply at their best together. More than 6 million sold records speak a clear language. Live the Fantastischen Vier are a very special experience. But is that still the case after a quarter of a century on stage or are Fanta4 slowly showing signs of fatigue?

Nearly a year and a half after their last guest appearance in Frankfurt, the four Stuttgart natives stopped by the Festhalle once again on Thursday, where they performed their greatest hits in front of a completely sold-out crowd. And quickly the question could be answered, if after all these years the quartet has run out of steam. This can be answered with a very clear "no". Even if the show of the last tour was technically a little bit more spectacular, Fanta4 created a really brilliant atmosphere musically, just because of the great song selection this time. Not only did they prove their musical versatility, but also a good portion of humour and self-irony.

So the dinosaurs of German rap seemingly ended their program after a relatively short time. After a spectacular confetti rain, the music simply went out. Technical breakdown? Fan rip-off? No - rather a little gag, because after a mini break full of questioning faces the Fantastischen Vier ignited a hit firework of the extra class, which even made the not perfect acoustics in some places of the Festhalle bearable.

Whether the solo performance of Thomas D. during an extra long version of "Krieger", the nice cameo during "Name drauf" by singer Seven, who could already convince as opening act, relaxed vibes during "Tag am Meer" or the boiling over atmosphere during the super hits "MFG" and "Populär" - the motley audience got their money's worth in almost every second of this concert. This was really a "Best of", which fully deserved this name! And so at the end it was clear to all fans: We are looking forward to the next quarter of a century with the Fantastischen Vier!