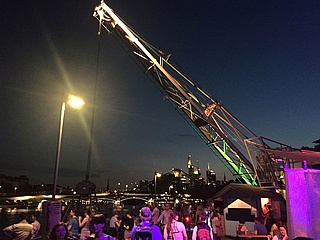 And by no means a summer slump - the Summer Wharf is once again attracting visitors to the banks of the Main this summer holidays! From Friday, July 19, through Sunday, August 4, this beautiful, free event offers plenty of culture in public spaces. Over 300 local and international performing artists will be taking part, creating a very special cultural space for 17 days of theatre, music and performance around the Wesel Shipyard site. The international theatre and performance festival Sommerwerft is organized by the protagon association and will take place for the 18th time this year. The City of Frankfurt is sponsoring the 2019 festival with 48,500 euros.

"The Sommerwerft, with its freely accessible, low-threshold cultural offerings, is a cultural festival for all people in this region, shapes the Frankfurt summer and stands for the cosmopolitanism of our city," says head of culture Ina Hartwig, who will visit the festival on Wednesday, 31. July.

The festival program ranges in the Bedouin tent, theater tent or outdoor theater from live concerts, performances, dance and theater to children's program, poetry slams and workshops. On the opening evening, the theatre ensemble Ondadurto Teatro will be giving the German premiere of the play "Terra Mia", asking to what extent the individual human being can still be a creative being in today's social value system. On July 24, the Czech ensemble Teatro Novago Front will follow with "Nautilus" in search of the oasis of peace, on July 25 the Italian artists' group Teatro Nucleo with the play "Domino" about the imprisonment of people in a ruthless system, and on July 31 a symposium as part of the EU-funded project "Contact Zones". The aim of this project is to create interaction between art and local people in unconventional public spaces. On the last weekend of the festival, August 2 and 3, the artistic director of the Sommerwerft Bernhard Bub and his ensemble antagon TheaterAKtion will celebrate their premiere; his play "Traum einer Sache" (Dream of a Thing) recalls the rebellion of the 1968 movement. The festival kicks off daily at 5:45 p.m. with music in the Bedouin tent; drinks and international food are provided.

The Sommerwerft is free to visitors and is made possible each year by donations, city funding and more than 500 volunteers from some 20 countries. This year, for the first time, the Summer Yard is going vegetarian, saving nearly 36,000 kilograms of CO2 through the ton of meat avoided.