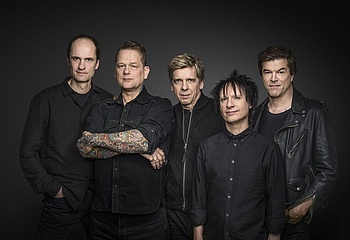 Fans of the Düsseldorf rockers can rejoice: this year, they have not only been treated to a new album by Campino & Co. Now Die Toten Hosen are also coming on a big tour - which of course will also take them to Frankfurt. On November 30, they will make a stop at the Festhalle on their "Laune der Natour". After the huge success of "Ballast der Republik", the Hosen took five years before presenting new material to their fans. A well-deserved breather after the big "Der Krach der Republik" tour. Besides the great successes, the band also had to go through some very hard moments in the past years: "The last years have brought us a lot of joy, but there were also bitter moments: The death of our long-time friend and manager Jochen Hülder was a shock. One and a half years later we also had to say goodbye to our former drummer Wölli, who lost his fight against cancer. Both events made us realize once again how lucky we are as a band with our friendship, but also that our time doesn't last forever. It's a privilege that after 35 years people are still interested in the Hosen and what their new songs have to offer. We also see that as part of our raison d'être, that people are still arguing about our music these days."

Death and transience are a big theme on the album, but as commonplace as sad happenings are just as joyful moments, which find equal expression in the new songs. Life is not only black or white, and so with all the necessary thoughtfulness, with serious or political topics there must always be room for a gag or sometimes crude humor. Gladly also within a song. Joy and sorrow are close together on "Laune der Natur", they are two sides of the same coin, just like in real life. The last song on the album is sung by their late drummer Wölli, on "Kein Grund zur Traurigkeit" you can hear him sing one last time together with his friends.

There will be some thoughtful moments on the tour for sure. But there will also be some real banging and fans are guaranteed plenty of opportunities to sing along loudly and rock out hard. Because one thing a Hosen concert never is: Boring. On the contrary! So, get your tickets fast! The presale starts on 30.08.2017 at 6pm!