Diesel driving ban in Frankfurt is coming
from FFM Aktuell 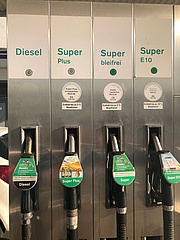 After a lawsuit filed by the Deutsche Umwelthilfe (German Environmental Aid) due to excessive nitrogen oxide levels in Frankfurt, the Wiesbaden Administrative Court ruled on Wednesday, September 5, that a diesel driving ban must apply in Frankfurt from February 01, 2019. Then all Euro 4 diesel vehicles will be affected for the time being. The newer Euro 5 diesel cars will then have a grace period until September 2019. The ruling is likely to anger many owners of especially newer diesel vehicles. And also at the city was not exactly jubilant after the announcement of the ruling.

"I regret that the increased efforts of the city to comply with the limits for nitrogen oxide pollution in a timely manner were not more appreciated by the administrative court," said Klaus Oesterling, head of transport. "Driving bans for older diesel vehicles represent a cut in the overall urban transport system on an unprecedented scale. They ultimately affect the people who made a supposedly environmentally friendly choice in reliance on the manufacturers' statements. The City of Frankfurt now expects the State of Hesse to quickly update the clean air plan in close consultation with the city on the basis of the written reasons for the ruling, which are still outstanding. From the Federal Government, we expect quick decisions on the hardware retrofitting of diesel vehicles at the expense of the car industry."

His colleague in the Magistrate's Office, Head of the Environment Rosemarie Heilig, therefore also calls for consistent enforcement of the right to clean air at all political levels: "For far too long, the Federal Government has downright sabotaged binding European directives to protect health. This breach of the law must come to an end. Instead of ensuring clean air, the Federal Government has held the stirrup to the fraudulent automobile lobby. Cities and consumers must now pay the price for this."

The court's demand to include driving bans as a measure in the clean air plan from 2019 is bitter for Councillor Oesterling, but understandable: "Despite all our efforts, we as a municipality are getting the receipt for ten years of political standstill in Berlin, for so long the Association of Cities has been pointing out the nitrogen oxide problem and demanding a Blue Badge. I don't even want to start on the German automotive industry's bogus diesel cars." The head of traffic now expects that the state of Hesse in close consultation with the city determines how extensive a driving ban zone would have to be to meet the standards of effectiveness and proportionality: "People must also understand such a driving ban in the urban area, and we must be able to control it," pleads the councilman.

Also to the exemptions, the state should make clear specifications, ideally in consultation with other states (especially Rhineland-Palatinate), to avoid a patchwork of different regulations, Oesterling demands. For all his displeasure, however, he also reminds us that the introduction of the environmental zone in 2008 did not lead to the collapse that some had expected: "Even then, there were fears that the city would become desolate and that entire branches of industry would go out of business, but the road traffic office worked through this well and really used a sense of proportion when issuing exemptions."

"We've put a lot of measures on the table for the court in the transportation area, some of them new, that will be quite effective, for example, in reallocating land to make gap closures possible for bike traffic. However, we will not be able to solve the problem solely with technology projects from the federal government's Clean Air Emergency Program, which otherwise continues to leave us alone," explains Oesterling.

He refers in this context again to the importance of public transport for air pollution control: "Already now, about three quarters of the passenger kilometres in the urban area are covered electrically: by underground and tram." In addition, he said, Frankfurt has one of the most modern and thus cleanest public bus fleets in Germany.

"However, all these measures were not extensive enough for the court to be able to avoid driving bans for diesel. I regret this extremely, but we will have to find a way to deal with this together with the state of Hesse," said Frankfurt's head of transport