DIRTY DANCING at the Alte Oper: One set brings the hall to a boil
from FFM Aktuell 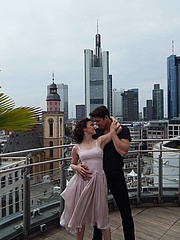 Wednesday was the premiere for the new guest performance of the stage adaptation of the classic film "Dirty Dancing" at the Alte Oper. The musical had already thrilled audiences in Frankfurt in 2015. Now the play, in which the screenwriter of the film was also significantly involved, is again until 07 January in the Main metropolis and takes his audience in a rousing way to the summer of 1963. After a few minutes it is clear: The creators have succeeded very well, what makes the film so special, also transported to the stage.

The great stage set transforms into the most diverse areas of Kellerman`s Mountain House, where Frances "Baby" Houseman spends her summer vacation with her family, just by turning the individual components. And with the help of charmingly implemented projections, Johnny and Baby suddenly find themselves in the woods or in the lake where they practice the legendary lifting figure. This setting allows the story to unfold very well, which largely sticks closely to the movie version, adopting much of the dialogue one-to-one. But new scenes and more songs have also been added. In the film, for example, the discrepancy between the idyll at Kellerman`s and what else is going on in the country is only hinted at. In the stage version, this is then fleshed out, for example by Neil Kellerman wanting to join a protest march for black rights or by addressing Martin Luther King`s history-making speech.

But first and foremost, of course, is the love story of Baby and Johnny, played again, as in the first guest appearance, by Anna-Louise Weihrauch and M&aacute;t&eacute; Gyenei. Meanwhile, the two are a perfectly coordinated team that can really make the sparks fly in the crucial moments between Baby and Johnny. That's incredibly important, especially for the finale. The two are not the only members of the ensemble who get to slip into their "Dirty Dancing" roles again. Marie-Luisa Kaster as Penny, Natalya Bogdanis as Baby's sister Lisa or Dennis LeGree as Tito Suarez are also part of the cast again. Terita Botha again makes a special impression as Elizabeth, interpreting some of the most famous songs from the million-selling "Dirty Dancing" soundtrack with her extremely powerful and warm voice.

The atmospheric set, the timelessly beautiful story, the great actors, the rousing dance choreography and, of course, the immortal songs - all this ensures that the almost two hours that you get to spend here at Kellerman`s fly by. And when Johnny says at the end with "My baby belongs to me" the sentence all fans have been waiting for and the whole hall breaks out in frenetic cheering, which seems to last the whole closing number, then really every visitor will be able to say with satisfaction: "I`ve had the time of my life".

DIRTY DANCING can be seen at the Alte Oper until 07.01

You can get tickets HERE