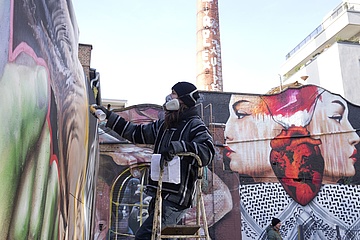 (ffm) TRANSURBAN is an international art project at the intersection of urban art and participatory urban space research. From Saturday, August 11 to Wednesday, August 29, the project initiated by the Cologne art association artrmx will be a guest at the Kunstverein Familie Montez with its archive container and an accompanying program. The program includes workshops, city tours, art actions and music happenings in public spaces.

At the center of the two-week program is the Urban Art Archive, which will be placed in public space in the form of a dismantled container. What started in 2017 in six cities in the metropolitan regions of Cologne, Düsseldorf and the Ruhr region is now embarking on a supra-regional research tour. The goal: to document and collect urban art at additional locations in order to advance the discourse on urban art. A digital overview map on the archive's website marks its current location and provides further information on the individual works. The project is interactive: contributions can be made both online and on-site.

For a long time now, street art and graffiti have been defining constants in the appearance of our cities as central currents of urban art. "Graffiti, in particular, has become one of the most highly regarded forms of public art in the last decade. As a branch of street art, they are not only an important part of contemporary art, but also enrichment and inspiration," says Head of Culture Ina Hartwig.

In art studies, in the institutional cultural sector as well as in cultural policy, street art is nevertheless mostly only a marginal phenomenon. The fact that this still relatively young art movement has a hard time with the institutions may also be due to its subversive character as well as the restrained mediation work and the loose structures within the scene itself. The TRANSURBAN - Urban Art Archive promises to build bridges and presents innovative approaches for an intensive engagement with the art genre as well as with its own urban space. From Frankfurt, TRANSURBAN then moves on to Antwerp and Amsterdam.

The opening will take place on Saturday, August 11, at 4 pm at Kunstverein Familie Montez, Honsellstraße 7. All dates and further information can be found on the City of Frankfurt's cultural portal at Https://bit.ly/2Oo85w5 and at

. The Urban Art Archive can be found at archiv.trans-urban.de