Donation against chocolate egg: Benefit for MS patients in the Skyline-Plaza
from FFM Aktuell 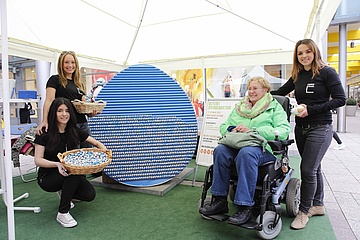 Do something good with chocolate eggs - that's what you can do on Friday (Feb. 23) and Saturday (Feb. 24) at the Skyline Plaza shopping center. Here, Capco, a business and technology consultancy from Frankfurt specialising in the financial services industry, is holding a colourful charity event to support the close-knit counselling and therapy service DMSG Hessen.

Taking part is easy: for a donation of at least two euros, you can buy two chocolate eggs. You can then put one of them on a 1.60-meter scaffold in the shape of a monumental Easter egg and snack on the other one yourself - mmmmh, delicious! At the end of the charity event, Capco will donate the Easter eggs on the frame to Frankfurt's Arche children's charity project.

"With our benefit campaign, we want to draw attention to multiple sclerosis and support the work of the DMSG Hessen, which helps MS sufferers in their everyday lives and advises them in all situations. In addition, it is important to us to do something good in the city where we are based with our company and to support a charitable organisation," explains Alvaro Jorda, who is coordinating the charity campaign at Capco together with Daniel Seyffardt and will be on site with a team of colleagues from 10.30 a.m. to 8 p.m. on each of the two days to collect donations for the chocolate eggs and thus for the DMSG Hessen.

The DMSG Hessen will also be represented at the stand. Main and honorary coworkers stand interested speech and answer, inform about the self-help organization, the hessen far close-meshed support and assistance net with consulting centers at five locations as well as the MS groups, which are for many MS patient an indispensable approach place, in order to exchange themselves with other concerning. For a donation of 10 Euros or more, donors can sign up on a list on display so that they can then receive a donation receipt from the DMSG Hessen. Capco will donate the chocolate eggs sold to the Arche children's aid project in Frankfurt at the end of the charity campaign.

For the second time since 2015, the management and technology consultancy is organising such a charity event to benefit MS patients in Frankfurt and Hesse. For example, it is part of Capco's corporate philosophy to encourage employees to get involved in charitable activities and organise fundraising projects. The initiative for the "Donation for Chocolate Eggs" campaign came from Alvaro Jorda's colleague Janina Schwarz, who will once again be part of the team of helpers. Because Janina Schwarz knows what multiple sclerosis means, with which restrictions, but also with which uncertainty about the course of the disease affected people have to live. Her grandmother herself had MS.