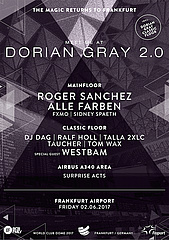 The last two Dorian Gray events at Frankfurt Airport in 2015 and 2016 were a complete success, with tickets selling out within hours. Since then, the event has become an international party highlight. Now the event is going into the third round and, true to the motto "The Magic Returns For One Night" of the former Dorian Gray Airport Club, will attract people to Frankfurt Airport to party on 2 June. After the BigCityBeats WORLD CLUB DOME kick-off in the Commerzbank Arena Frankfurt, shuttle buses will take you across the airport grounds directly to the gates, which have been converted into clubs.

The main floor at the gate features international top DJs such as ROGER SANCHEZ and ALLE FARBEN. Roger Sanchez shot up the charts worldwide in 2001 with "Another Chance" and became a highly sought-after artist. Berlin-based DJ and producer ALLE FARBEN had his breakthrough in 2015 with the remake of the Reamonn track "Supergirl," which stayed on the German charts for 42 weeks. The hit "Please Tell Rosie" landed at #3 on the singles chart and earned the Echo winner his second platinum award. Since then, ALLE FARBEN has been headlining festivals across Europe.

The Classics Floor is reminiscent of the legendary airport club Dorian Gray, which was a popular place to party in Frankfurt in the eighties and nineties. This year, artists such as DJ DAG, TALLA 2XLC, TAUCHER and TOM WAX will be performing. The special guest will be WESTBAM alias Maximilian Lenz. The Berlin native has made a name for himself in the techno music and rave movement as a DJ, author and founder of the techno label Low Spirit Recordings.

Besides the familiar line-up, the nightly view of the airfield and the third floor in a converted A340 aircraft will impress. With their event, BigCityBeats and Fraport AG offer a unique party location that only exists once in the world.

As an international company and operator of a major air traffic hub, Fraport AG lives and promotes cultural diversity. The Dorian Gray at Frankfurt Airport was a driving force behind electronic music and club culture. Today, electronic music is as international as the passengers who travel through Frankfurt Airport every day. Visitors to the WORLD CLUB DOME also come to Frankfurt from all over the world. This internationality connects Fraport and BigCityBeats WORLD CLUB DOME and together they will turn the airport into a unique party experience for one night.

On April 11, the pre-registration phase for Dorian Gray 2.017 started. You can register for it at the following link: <link http: www.doriangray.club>