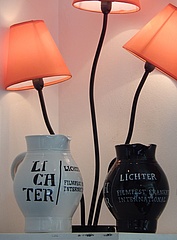 One of the most successful German directors becomes patron of the 10th LICHTER Filmfest. Doris Dörrie will open the anniversary edition of the festival at Frankfurt's Mousonturm on March 28. She brings her latest film to the Main as well as her great soft spot for the LICHTER annual theme.

Following Volker Schlöndorff, Leander Haußmann and Edgar Reitz, LICHTER will once again have a great personality of filmmaking at its side in 2017. "Doris Dörrie has always inspired me as a filmmaker. She will carry away the audience, but also the many young filmmakers," festival director Gregor Maria Schubert is certain. Dörrie was also chosen for reasons of content: "Hardly any other director depicts reality so precisely in feature films. Doris Dörrie is thus both patron and godmother of our annual theme &sbquo;Truth'."

"I try to get at the truth by giving reality a lot of space in my films," Dörrie says of herself. In her stories, she teases out the extraordinary from the supposedly mundane. Whether it's about love in old age or the question of how far we would go for a loved one, her characters always live for the moment. "What interests me most is the truthfulness of the characters and their world," Dörrie says. "That's why I decided a long time ago to work in a very documentary way."

With films like "Men," "Me and Him," "Cherry Blossoms - Hanami" and "Happiness," she not only paved the way for many talented women to enter the film business, she also proves time and again how well mainstream cinema and substantive ambition go together. Since 1997, Dörrie has taught as a professor of applied dramaturgy and material development at the Munich University of Television and Film. She has also published various non-fiction books, novels and children's books. At the Berlin State Opera, she has directed several operas, including Cosi fan Tutte.

On March 29 at 7:15 p.m. Dörrie will present her latest film Grüße aus Fukushima at the Mousonturm. Following the screening, the director will talk about her film.