Down Mall 2017 at MyZeil
from FFM Aktuell 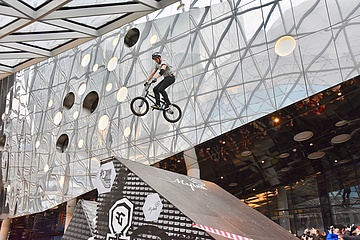 January 28 was actually a normal Saturday for visitors to Frankfurt's city centre to shop extensively. Quite normal? No! In the shopping center MyZeil, professional BMX riders and mountain bikers performed top sporting feats. For the second Down Mall event, many of the escalators stood still here for a few hours. More than 35 top athletes from all over the world transformed the shopping center into a huge race track. The bikers raced down all the escalators and floors to the ground floor at insane speeds. All with the aim of later standing on one of the winners' podiums. The second discipline of the competition was for the riders to show as difficult and technically flawless jumps as possible.

The Down Mall event has already been held in several cities - Hanover, Berlin, Budapest, Bratislava, Prague - and now for the second time in MyZeil.

Around the race track fans and enthusiastic spectators gathered, who followed all the races as if spellbound. It all started for the drivers with a start from a metre-high ramp from the 5th floor. After the lightning starts, the athletes had to make sure they didn't waste any valuable time and cleared the hurdles on the course quickly - and preferably without falling.

The Down Mall event is a huge challenge - even for the sport's elite. More than in other competitions, perfect control of the bike is essential here. "Off-road, the ground is usually rather earthy, due to the smooth surface in the shopping center, you reach completely different speeds here in the MyZeil. And that's despite the fact that the course itself - unlike outdoors - is mostly flat. You have to pay close attention," says driver Anton Winter from Bad Soden am Taunus.

The freestyle jumps on the big kicker in the MyZeil food court were particularly spectacular. In front of the brilliant backdrop of the glazed and architecturally unique shopping centre, the pros presented daring jumps. A drummer and a DJ together provided the special musical background for the event.

At the award ceremony it became clear once again that all participants had one thing above all: fun! Although every professional here was fighting for himself, they seemed like one big circle of friends.

All amateur photographers who gathered at the railings during the competitions with their smartphones and cameras - and captured unique moments - could submit their best photo to the called photo contest until January 31. Now they have the chance to win a 500 Euro shopping voucher. Those who want to have a look at the pictures and vote - still have the opportunity until February 6 at Http://fotocontest.myzeil.de/