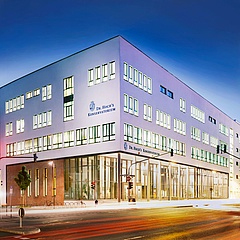 (ffm) A modern foundation of its time was what Dr. Joseph Hoch had in mind when he stipulated in his will in 1857 that his fortune should go towards the establishment of a foundation with which he wished to "enable impecunious musical talents to receive free instruction in all branches of the musical arts".

The Conservatory was established as a foundation in 1878 and this year marks 140 years of existence. To mark the occasion, a festive anniversary concert was held on Friday, September 7, featuring works by Carl Philipp Emanuel Bach, Wolfgang Amadeus Mozart and Antonio Vivaldi, performed by the Conservatory's choir and orchestra under the direction of Helmut Sohler and Mark Opeskin. For Ina Hartwig, Head of the Department of Culture and Science and Chairwoman of the Foundation's Board of Directors, the house is a place of art and creativity: "Students and pupils from all over the world meet here. The tradition-rich education combines the artistic field with the equally important field of music education," said the city councilor in her welcoming speech. She praised the conservatory as a "jewel in Frankfurt's cultural landscape and an outstanding educational institution".

In keeping with Frankfurt's tradition of civic engagement and following the example of Johann Friedrich Städel, Dr. Hoch donated almost his entire fortune to the establishment of a musical-artistic training institution for all ages, thus creating an important and traditional Frankfurt cultural institution with a worldwide reputation. "We are grateful that in Frankfurt, numerous citizens have created a multitude of renowned institutions through their foundations and donations, with which they have shaped Frankfurt and given us a rich cultural heritage," said Kulturdezernentin Hartwig.

The Dr. Hoch&acute;s Conservatory is almost unique in Germany in its form: from early musical education to the promotion of young musicians and amateurs, and from the promotion of studies to state-recognized music education, everything is united under one roof.

For example, the first jazz class in the world was not to be found in the USA, but in Frankfurt at the conservatory: a credit to director Bernhard Sekles, under whom the institute was far ahead of its time in the 1920s. The Conservatory has always been renowned for the quality of its musical education, not least because of its lecturers, and this is still the case today. Clara Schumann, Engelbert Humperdinck, Joachim Raff and Albert Mangelsdorff, among others, have taught here to date. Thus, Dr. Hoch's Conservatory is often the start of a successful musical career, as evidenced by the careers of Hans Pfitzner, Edward MacDowell, Percy Grainger, Paul Hindemith, Ernst Toch, and Otto Klemperer, who all completed their training at the institute