DRESSES MAKE PEOPLE: Elegant in the brewhouse
from FFM Aktuell 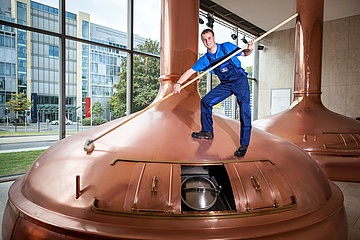 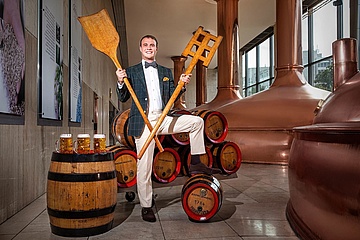 When brewers get fancy

Finally, Sebastian Müller (21) can breathe a little easier. Now that the October festivals in the cities are coming to an end, the large boilers in the brewhouse of the Binding brewery are polished to a high gloss from the outside, it is time to also enjoy the Frankfurt barley juice once - of course in peace after work. Together with other colleagues, the trained brewer and maltster is responsible for ensuring that the Binding festival beer is of the usual high quality. It is brewed exclusively from water, malt and hops according to a special recipe. As a result, the beer speciality tastes particularly drinkable, aromatic and full-bodied. It is ready six weeks before the start of the festival and is then stored in the brewery's cellars.

Müller has remained loyal to the brewery even after his three-year apprenticeship. In his spare time, he plays goal for the 2nd team of FC Laudenbach. He likes to wear streetwear. Now he is the proud owner of a smart suit combination for autumn. Stephan Görner gave it to him as a present, because he was the model for the campaign "Kleider machen Leute" (Clothes make the people) and had himself photographed by Nikita Kulikov in the brewery's brewhouse with stirring staff and malt shovel. Görner tailored him a green jacket with a beige check pattern, a beige tailored shirt and beige cotton trousers. "That's what I'm wearing to the charity gala &acute;Kleider machen Leute`, which takes place on November 12 at the posh Hotel Kempinski", says Müller, adding, "This is my first big gala, I'm looking forward to seeing Paul Potts and the other models supporting the campaign."

Each month, the initiators Stephan Görner and Sven Müller present a new professional group, which is first authentically photographed at the workplace and later in a tailored suit or costume. "The aim is to generate appreciation, recognition and respect for these people and professions", says Görner. "Without these people, who work hard and sometimes do dangerous or extraordinary jobs, the Main metropolis would not function", Sven Müller added.

A calendar with all twelve motifs will be published at the end of the year. "There are spectacular photographs in it. We were in the JVA, in a table dance bar, have photographed in a refrigerated warehouse and in the Commerzbank Arena," Nikita Kulikov, who "puts the models in the right light", is pleased.