Drone show as highlight of the Altstadtfest
from FFM Aktuell 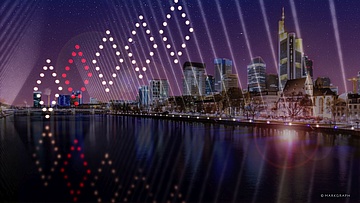 As we told you HERE have already reported, the big Old Town Festival in Frankfurt will be celebrated from September 28 to 30 to mark the completion of the DomRömer area. Having already presented most of the programme two weeks ago, Lord Mayor Peter Feldmann, Thomas Feda, Managing Director of Tourismus+Congress GmbH Frankfurt am Main (TCF) and organiser of the celebrations, and Stefan Weil, Managing Director of Frankfurt creative studio Atelier Markgraph, have once again presented a very special highlight of the festivities in detail:

The spectacle will take place between Eisernem Steg and Untermainbrücke. Mayor Feldmann is full of anticipation: "Frankfurt carries within itself the constant dialogue between the past and the future. This is also manifested in the city's architecture - only here do skyscrapers tower up behind half-timbered facades. The latest example of this is Reconstruction of the Old Town, which we want to inaugurate with a historically supportive as well as technically forward-looking production."

Thomas Feda adds, "The banks of the Main, the adjacent Römerberg and the cathedral are considered central places of Frankfurt life - then as now. This is where kings were elected, food was traded and festivals were held. With the opening of the new quarter, more life is to return to the centre of the city. We want to celebrate this spectacularly."

City of Diversity and Contrasts: A Tribute to Frankfurt

"Sternenbilder" will narrate defining events and landmarks alongside outstanding personalities and figures of the city.

Stefan Weil provides insight into the creative process: "Frankfurt is a place of diversity and contrasts. Here, dialogue has been lived and celebrated with aplomb for centuries. Even in the new old town, traces of this contrasting city identity can be found everywhere. We use the latest generation of technology for an iconographic performance that pays homage to this cosmopolitan attitude of Frankfurt in poetic images. The Main, lifeline of the city, is the perfect stage for this."

The flight formations of the drones against the backdrop of the Main at night are accompanied by sculptural lighting effects of different coloured Sky Beams. The soundtrack of the production takes up the idea of dialogue musically: Sebastian Hohberg and Jan Mayerhofer of hoerfeld created a fusion of classical and electronic music especially for this occasion. Parts of the composition reinterpret the influential baroque composer Georg Philipp Telemann. Telemann also lived in Frankfurt's old town for a time. The embedded quotes are penned by probably the most famous former Altstadt resident, Johann Wolfgang von Goethe - an ardent advocate of diversity in his day.

Planning complexity and a pinch of luck

A show of this kind has never been seen before in Frankfurt and also stands in the context of innovative aerial shows worldwide. The conceptually and organizationally challenging project was realized by an international team. The design concept for the "star images" comes from the Frankfurt-based creative studio Atelier Markgraph, which implemented the staging in collaboration with the lighting designers from bright! and the drone experts from SKYMAGIC.

The choreography of the drones presented a special challenge: Because the star images, which result from their flight position, should be recognizable from as many different perspectives as possible.

On the other hand, the weather cannot be planned. If it storms or rains, the drones have to stay on the ground. But there is also a solution for the worst case scenario: in that case, an alternative date will be announced at short notice.

The drone show will start at 9:45 p.m. on Saturday, September 29. The public dress rehearsal already starts on Friday, September 28, also at 9.45 p.m.