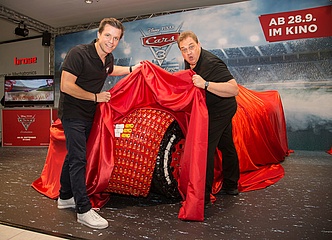 Voice actors Oliver Kalkofe and Benedikt Weber were amazed when they unveiled a very special Lightning McQueen, the legendary race car from the CARS movie series, during a photocall at the IAA in Frankfurt on Tuesday: The life-size model is made up of 5,554 toy cars - Mattel's popular small diecast cars - and features 22,216 wheels and 11,108 front headlights. This one-of-a-kind Lightning McQueen is a real head-turner and took 100 hours to create exclusively by hand.

Completely unprepared, the legendary Lightning McQueen is forced out of the sport he loves by a new generation of blazing fast race cars. In order to compete again, he must rely on the help of ambitious and young race engineer Cruz Ramirez. To get Lightning back on top, she's already hatched a plan, too. Using the late Doc Hudson as a role model and some unexpected driving maneuvers, she plans to make her scheme work. To prove that #95 isn't old news, Lightning must prove his mettle on the biggest stage of the Piston Cup race.

Director Brian Fee (storyboard artist CARS and CARS 2) raises the starting flag for CARS 3: EVOLUTION! Not only does it feature a reunion with the crazy and lovable stars of the first two hit films - the exciting and fast-paced third adventure presents numerous new characters who bring some serious speed to the big screen. Kevin Reher (DAS GROSSE KRABBELN, short film "La Luna") is responsible as producer.