Earth Hour 2019 - Lights out for climate protection
from FFM Aktuell 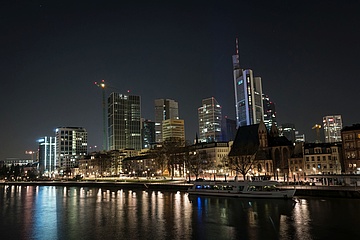 At the moment, it is not only young people who regularly take to the streets for climate protection. This year, the annual Earth Hour also wants to call on people to talk about the climate and do something for climate protection. Therefore, the WWF Earth Hour will take place on Saturday, 30 March - this year for the 13th time. At 8.30 p.m. local time, millions of people around the world will switch off their lights for one hour to set an example for climate protection. In Germany, almost 400 cities are taking part. Frankfurt am Main is also taking part from the very beginning. The city is therefore calling on all businesses to help darken the skyline for one hour. They can document their participation in Earth Hour in the Earth Hour Gallery at https://www.klimaschutz-frankfurt.de/earth-hour and upload their logo there.

Last year, as many as 183 companies and institutions from Frankfurt responded to the call, turning off the lights in more than 200 buildings for one hour. "Thanks to Fridays for Future, climate protection has gained much greater momentum in the meantime," says Head of the Environment Rosemarie Heilig, calling on people to "show that the protests of young people don't leave you cold by taking part in Earth Hour." Those who wish can also turn off the lights at home for an hour and thus express their solidarity. Because again, every contribution, no matter how small, helps. Many small steps also bring the goal closer.

The Steigenberger Frankfurter Hof invites citizens to the great Earth Hour Party for the third time together with the energy department. For the right music and good mood provides again the Frankfurt DJ Dennis Smith. Dancing will take place on a 4 by 4 meter dance floor in the courtyard of the hotel at Kaiserplatz. The dance floor consists of technical modules that produce energy when danced on. This will be used to illuminate the lettering "Moving Frankfurt Together."

Umweltdezernentin Heilig and hotel director Spiridon Sarantopoulos will welcome the dancers at 8:30 p.m. and together turn off the lights for Earth Hour. "The challenges that come with climate change are gaining importance for us and our planet. That's why it's important to raise awareness about climate protection with actions like Earth Hour and various other measures. We are happy to take part in Earth Hour again this year and thereby set a sign against climate change. Together with the energy department of the city of Frankfurt we want to move Frankfurt", says Sarantopoulos. New this year is an after-show party, which will take place from 9.30 p.m. at Cigarrum in the Steigenberger Frankfurter Hof: "This way, climate protectors can continue to celebrate after Earth Hour."

The WWF Youth Frankfurt has been participating in Earth Hour for many years and has planned an art installation on the theme "Preserving Biodiversity is Climate Protection" for 2019. It will highlight the richness of marine species and the threats they face. Kindergarten and elementary school children were involved in creating the installation from plastic waste in advance. "If we don't manage to contain global warming to 1.5 degrees, many species are in danger of becoming extinct," said Anne Zeiß of WWF Youth.

More than 170 companies of all sizes, with 215 buildings, are taking part in Earth Hour this year, helping to ensure that the skyline goes dark at 8.30pm. For example, the Messeturm and the high-rise buildings of many banks such as Commerzbank, Deutsche Bank and the ECB are taking part. Numerous large hotels are also taking part, as well as many smaller companies and associations. The city of Frankfurt switches off the lighting of the Römer and the bridges. Many churches are also taking part in the worldwide climate protection action.

More information is available at https://www.klimaschutz-frankfurt.de/earth-hour