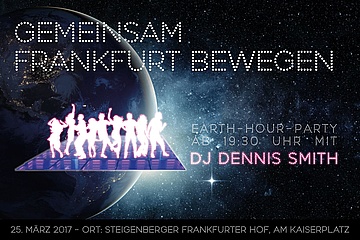 (kus) Frankfurt will once again be part of the action when 241 cities in Germany turn off their lights on March 25 during WWF Earth Hour. After the participatory action for citizens on the Römerberg last year, the organizers have come up with a new climate protection action: Together with the Steigenberger Frankfurter Hof, the energy department is inviting people to a big party for climate protection - with Frankfurt DJ Dennis Smith, who runs the climate-neutral Club Travolta in Frankfurt.

The highlight: the energy for the lighting is generated by dancing. For this purpose, the Hotel Steigenberger Frankfurter Hof is setting up a dance floor measuring just under 16 square metres in its cour d'honneur on Kaiserplatz, made up of technical modules. By dancing and moving on these modules, electrical energy is generated which is used for the lighting. Friends and supporters of climate protection are invited to dance along. Hotel director Moritz Klein: "Not only in Frankfurt, but all over the world people switch off the lights at 8.30 pm - also we at the Hotel Steigenberger Frankfurter Hof. With this action, we want to motivate people to think about how we can keep our planet alive, green and healthy. And not just at Earth Hour, but every single day of the year." "We are proud that Frankfurt has been a part of the global Earth Hour for many years. Our darkened skyline is an important symbol for our local climate protection activities and our contribution to global climate protection," added Rosemarie Heilig, head of the environmental department.

Parallel to the dance event, the WWF Youth Group Frankfurt will implement WWF's Germany-wide campaign in front of the Steigenberger Frankfurter Hof: This involves a globe with a diameter of five meters, which will be illuminated with approximately 2,300 blue and green LEDs.

The city of Frankfurt wants to set an example for climate protection and make a contribution to the worldwide Earth Hour under the motto "Moving Frankfurt together", in which 7,000 cities in 178 countries worldwide are now participating. Frankfurt businesses are called upon to switch off the outdoor lighting of their buildings between 8.30 and 9.30 p.m. on 25 March. The city itself will once again switch off the lights of the Römer, bridges and churches.

So far, 111 companies with more than 164 buildings have signed up for the action and documented their participation in the Earth Hour Gallery. It can be found at <link http: www.frankfurt-spart-strom.de mitmachen earth-hour-2017 galerie-unternehmen _blank>

The party starts at 7:30 p.m. on March 25 in front of the Steigenberger Frankfurter Hof Hotel, and admission is free. DJ Dennis Smith will play in the hotel's cour d'honneur