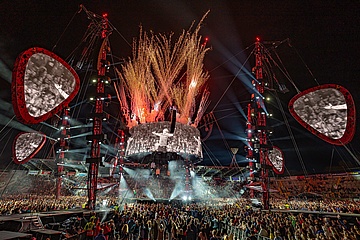 This coming weekend, the wait is finally over: on September 23/24 and 25, 2022, superstar Ed Sheeran will be in Frankfurt for three shows at once with his Mathematics Tour, where he will perform at Deutsche Bank Park. The concerts on Friday and Saturday have long been sold out, for Sunday there are still a few tickets available (as of 20.09.2022). Many fans have been looking forward to the Frankfurt guest appearance of Ed Sheeran for months, who last visited the Main metropolis in November 2017 as part of his successful "Divide Tour". So that this anticipation is not marred by annoyances at the journey or at the entrance and you can enjoy a carefree and simply brilliant concert evening, we have summarized the most important info for you here:

The most important thing is of course the tickets.

Load your ticket on your cell phone. If you have purchased tickets for more than one person, forward them to each person so they can also load their tickets onto their cell phones. IMPORTANT: You must enter the stadium together as a group with the main buyer. The main buyer must show in addition to the ticket at the entrance still a booking confirmation by mail (stored on the cell phone or printed out), as well as a valid photo ID.

Also make sure that your cell phones have enough juice. It would be annoying, if the battery says goodbye shortly before the admission!

Here you can find again all the info about Eventim.Pass

IMPORTANT: Re-entry after leaving the event area is not possible.

Ed Sheeran will not be on stage right away at 6 pm. But there is of course a supporting program. This will be contested on Friday and Sunday Cat Burns and Griff, on Saturday Dylan and Griff will be on stage as openers.

The actual show, in which Ed Sheeran will perform over 20 songs from his previous albums, ends at approx. 22:30.

The concerts will take place in Deutsche Bank Park.

Go here for the site plan

Those who can, should definitely arrive by bus and train:

To ensure that fans reach the stadium comfortably, some additional trips will be offered in addition to the regular connections to the stadium. For this purpose, the ticket for the event is valid as a ticket for round trip within the RMV:

Trains to the stadium

Trains after the end of the concert

From "Frankfurt Hauptbahnhof" at 23.42 clock (only on 23 September!) with stops at all stations to Fulda, arriving at 1.08 clock.

Additional stops at the stadium.

Tram line 21 will be reinforced by line 20 between Frankfurt Central Station and Stadion, so that trains will run at short intervals.

Between "Südbahnhof" and the stop "Stadion/Osttribüne" special buses of line 80 supplement bus line 61 with articulated buses at frequent intervals.

The area can also be approached comfortably by bicycle.

The arrival by car should be avoided if possible, especially since there is only a limited number of parking spaces. Who nevertheless does not want to do without the car, should arrive as early as possible.

Detailed info on how to get there can be found at: https://www.deutschebankpark.de/serviceinfos/anfahrt-und-parken/

Should there be any additional traffic measures at short notice, these will be announced in the days before the shows at https://www.deutschebankpark.de/ announced.

Be prepared for increased security checks. So that there are no nasty surprises at the entrance, note that only bags and chest bags with a maximum size of a DIN A4 sheet (approx. 20x30cm) are allowed on the stadium grounds. Also allowed are liquid hygiene and health items up to 100ml (max. 2 pieces per person) in suitable plastic containers.

Not allowed to bring

Cameras and other technical equipment

Naturally, no weapons, laser pointers, Bengalos or fireworks may also be carried. And that animals likewise may not be brought, understands itself yes surely of course.

You can find more info at: https://www.deutschebankpark.de/ and also at: https://www.rmv.de/c/de/informationen-zum-rmv/der-rmv/rmv-aktuell/veranstaltungstipps/deutsche-bank-park-konzert-ed-sheeran-23-24-und-259

We hope you enjoy Ed Sheeran!!!