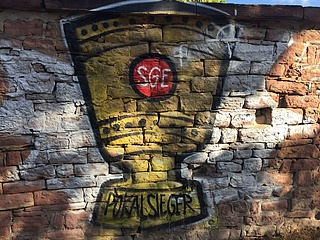 Unfortunately, it wasn't enough for Eintracht to make it into the Champions League this season, even though for a long time it looked like the Frankfurt side would make it into arguably the most important club competition in the football world for the first time in the club's history. But even if that dream is over (for now), Eintracht Frankfurt won another coveted award last week: gold at the prestigious industry award for brand management!

The jury of the German Brand Award, the renowned industry award for brand management, has awarded Eintracht Frankfurt 2021 gold in the category "Excellent Brands: Sports Associations & Sporting Clubs" as well as "Product Brand of the Year". The reason given for this honor is as follows: "For years, Eintracht Frankfurt stringent has been convincing through all ups and downs with outstanding brand work that is not only well received by die-hard fans, but also reaches a broad public - even beyond the region. In this way, the brand creates an emotional closeness that makes identification with the club easy."

Eintracht Frankfurt is "a phenomenon that you can't describe. You have to have experienced it to understand it. Emotional, approachable, likeable, diverse, modern and with a feel for trends and developments." This is how the club presents itself in the approximately 100-second presentation video submitted to the organizers of the German Brand Award. "Eintracht Frankfurt is not a brand. Eintracht Frankfurt is a phenomenon," it continues. 91,000 members, around 1000 fan clubs and many more supporters exemplify the aforementioned values on a daily basis. In turn, the club makes them tangible with authentic and accessible communication on all channels and levels. And thereby enables identification regionally, nationally and internationally - not only for fans and the surrounding area, but far beyond.

Over 120 years old, the club is the story of generations of sports enthusiasts, of a circle of a dozen founders and one of the most important sports clubs in Germany. Football, with its three professional teams, is the outstanding magnet, but the club's size and importance would be impossible to tell without the many other sports, their successes, titles and triumphs.

Jan Martin Strasheim, who as Head of Media and Communications at Eintracht Frankfurt is also responsible for brand work, is delighted to receive this award: "The club's history can only be fully grasped if Eintracht Frankfurt's deep roots with the fans are understood and felt. The love of the fans and their organised scene for Eintracht has become an unshakeable constant in its history. It is a relationship for life. It comes from within every Eagle Bearer and creates that identification and brand image that the German Brand Award has honored. We are very proud of this award."

Also honored was Eintracht Frankfurt's naming-right partner, Deutsche Bank, for its rooftop branding on Deutsche Bank Park. The illuminated lettering, which has adorned the roof since July last year, stretches over 73 metres and towers 8.46 metres into the Frankfurt sky. This makes the 16 blue letters one of the largest letterings in Europe. (Text: Eintracht Frankfurt Fussball AG, edited by Frankfurt-Tipp.de)